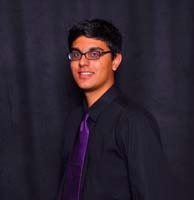 Whenever I went to physics class in 8th and 9th grade, I was fascinated – first by the simplicity of mechanics, then by the pervasiveness of E+M, then by the challenges brought by modern physics. Always the ambitious student, I wanted to become "good at physics." When I learned about the Physics Olympiad, I saw an opportunity to prove myself.

In 10th grade, I started the Physics Olympiad Club at my school. Every day, I worked through online problems with classmates and even made some of my own. When I heard about the legendary Introduction to Classical Mechanics by David Morin, I immediately started trying problems from that book. Throughout 10th and 11th grade, I equated physics prowess with cleverness in solving physics problems. Mathematical tricks for reducing infinite systems to simple ones and maneuvers for simplifying equations that arose from physical systems excited me.

Finally at the end of 11th grade, I had "proven that I was good at physics" by making the 2015 U.S. Physics Team. When I arrived at the camp last year, I was pleasantly surprised. Each lecture, problem, and conversation I had at camp ended up providing physical insight beyond the typical cleverness that I had spent two years trying to master. In lectures, we would learn how to derive some of the foundational distributions in statistical mechanics. Outside lectures, fellow students and Coach Paul would explain interesting consequence of physics such as why a piano can never be perfectly tuned. (I think I am contractually bound not to disclose what the problems they gave taught me in case any future physics campers decide to peruse through my bio.)

I came back from camp with a renewed interest in physics insight and intuition. I changed my school's Physics Olympiad Club to a general Physics Club where I would introduce new physics topics that would not have been taught in a classroom. I reread Morin's book – this time to learn about new ways to look at physics such as the effective potential for rotational motion.

My proudest achievement this year however was the theoretical research I performed. With the help of my mentor, Dr. Herbots, I created a model that related the surface energy of Silicon wafers to the fraction of defects on their surface. The math required to create this model only took up 1 double-columned page, but it took months to develop the physical intuition to approach this problem. I have never felt more confident in my physics ability.

This year I come back to camp eager to share the physical insight and intuition I have gained over my unique physics journey and to learn even more about the fascinating consequences of physics.