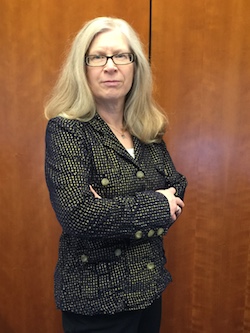 College Park, Maryland, October 13, 2021 — Beth A. Cunningham of the American Association of Physics Teachers (AAPT) has been named a Fellow of the American Physical Society (APS) by the APS Council of Representatives upon the recommendation of the APS Forum on Education (FEd). The number of APS Fellows elected each year is limited to no more than one half of one percent of the membership. It is a prestigious recognition by her peers of her outstanding contributions to physics.

The citation on her certificate is: “For efforts supporting teachers and educators in physics at all levels on a global level, and for significant contributions to the physics community in identifying areas of focus in physics education and for promoting equity, diversity and inclusion in physics learning.”

Cunningham earned her B.S., M.A., and Ph.D in Physics at Kent State University. She became AAPT Executive Officer of AAPT in 2011. During her time at AAPT she has worked with the association’s leadership, committees, and staff to increase the focus on excellence in physics education with particular emphasis on improving the educational and occupational opportunities for women and historically marginalized groups within the physics education community. She assisted with the development of the AAPT Code of Conduct in 2016 to ensure “a safe and productive experience at all AAPT sponsored events for all event participants, regardless of sex, race, color, personal appearance, national origin, religion, age, physical disability, mental disability, perceived disability, medical condition, ancestry, marital status, sexual orientation, or any other basis protected by federal or applicable state laws or local ordinances.”

Her professional contributions have included numerous refereed publications, workshops, and presentations, and Cunningham helped to lead important faculty development projects including the Project Kaleidoscope Summer Leadership Institutes, the Council on Undergraduate Research (CUR) Transformations Project, and the U.S. delegation to the I.U.P.A.P. International Conference on Women in Physics. With funding from the National Science Foundation she co-produced the 2014 video, HERStories: Wisdom and Encouragement from Women in Physics. Leading a committee of women physics and astronomy educators she developed the eAlliances Project in 2017, and is currently the Principal Investigator of the Physics and Astronomy SEA Change Pilot Project.

Regarding her selection to receive this award Cunningham shared, “I am honored to be elected as a Fellow of the APS especially for work in supporting the physics education community and diversity, equity, and inclusion. My efforts would not have been possible without the help of many other physics educators, AAPT members, AAPT staff, and colleagues around the world.”

AAPT is an international organization for physics educators, physicists, and industrial scientists—with members worldwide. Dedicated to enhancing the understanding and appreciation of physics through teaching, AAPT provides awards, publications, and programs that encourage practical application of physics principles, support continuing professional development, and reward excellence in physics education. AAPT was founded in 1930 and is headquartered in the American Center for Physics in College Park, Maryland.