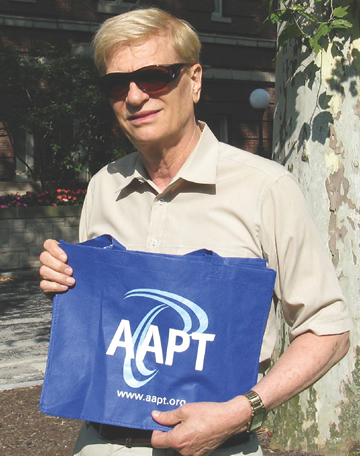 The Doc Brown Futures Award recognizes early-career members who demonstrate excellence in their contributions to AAPT and physics education and exhibit the potential to serve in an AAPT leadership role. A monetary prize of $1,000, a commemorative plaque, complimentary registration to an AAPT National Meeting and two nights lodging in the conference hotel, and reimbursement for reasonable travel expenses to attend the AAPT Summer Meeting to receive the prize are given to the recipient. In addition, the awardee will be assigned a mentor who is a current AAPT leader and will be offered the opportunity to serve on a committee or task force of their choice (in collaboration with the AAPT President or equivalent). Candidate must be a current AAPT member for a minimum of 3 years. Candidate must be “early career” which is defined as an individual who has been full-time in the profession of physics education for no more than seven years at the time of nomination. Presented annually, pending receipt of qualified nominations. Self-nomination is acceptable; however, candidates are encouraged to invite peers and colleagues to support the nomination.

Robert William Brown (Distinguished University and Institute Professor in the physics department at Case Western Reserve University) has had a rewarding five-decade career in teaching, research, and entrepreneurship. An Inaugural Fellow of the AAPT, Doc Brown is associated with a number of educational innovations, including an early use of a fiberoptics electronic educational environment (1980s), of an early use of undergraduate teaching assistants (1990s), of published PER work on both “post-exam syndrome” and its treatment, and “cycling” or structured revisiting of classroom material. His teaching led to the writing of a thousand-page MRI textbook, which has been called the "daily companion of the MRI scientist.” Doc Brown has received five regional national teaching honors on his innovations in undergraduate and graduate teaching, and in 2004 received the AAPT Excellence in Undergraduate Physics Teaching National Award. A partnership with his wife, Janet Gans Brown has taken them to highlight the importance of AAPT in a shared life and their gratitude by this endowment.

In your nomination, please comment on the candidates involvement and leadership in AAPT, how they advance AAPT's mission, and how they engage in leadership through research and scholarship.

Listed below are the Doc Brown awardees and, if applicable, the title and citation information of their talks.