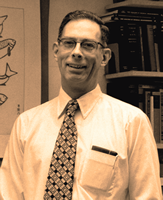 E. Leonard Jossem was a man of great passion. His passions extended to the teaching and learning of physics, his many friends around the world, his students and life itself.  Long after his retirement, he could be found in his office every day, talking to students and colleagues about physics issues and problems.  It was rare to attend an international physics conference and not see Len in attendance.  For 61 years he remained as active in the American Association of Physics Teachers as he had been when he was president so many years before.  Few people have had the wide reaching, long lasting impact on the physics community as Len Jossem.
Born in Camden, New Jersey, May 19, 1919, Len received his B.S. from CCNY, and his  M.S. and PhD from Cornell, specializing in experimental condensed matter physics. He served on the faculty at Cornell for seven years, as Staff Physicists and Executive Secretary of the Commission on College Physics for two years and on the scientific staff working on the Manhattan Project at Los Alamos during World War II. He joined the faculty at The Ohio State University in 1956, where he remained for 52 years, serving as chair from 1967-1989 and teacher for 33 years.  OSU is well known for the training of all physics graduate students in the good practices of exemplary teaching; a legacy of Len Jossem.
Len assumed leadership positions in many organizations: AAPT President, member of 11 committees, PI for the NSF/AAPT sponsored USA-Japan-China and InterAmerican Conferences on Physics Education, AAAS Council, AIP Governing Board, ICPE Chairman and book editor, UNESCO consultant, Commission on College Physics Chairman, IUPAP section chairman, and World Bank consultant. He was named a Fellow of APS, AAAS, New York Academy of Science, Royal Academy of Arts (London), and the Institute of Physics (London).  He received the Distinguished Service Award, Melba Newell Phillips Award and Oersted Medal from AAPT, the Howard E Maxwell Award for Distinguished Service to the Ohio Section of APS, the ICPE Medal of Excellence, and was a member of Sigma Pi Sigma and Phi Kappa Phi.  He also held honorary professorships in physics at Beijing Normal University, Beijing Teachers College and Southeast University in Nanjing, China.
Len’s passion for international physics can best be expressed in his own words, taken from an AAPT interview in 2008.  When asked about the importance of international collaborations to physics teachers in the US, he responded, “I would paraphrase Saint Augustine and say that the world is a book and those who know only their own country read only one page.  There is also a Japanese proverb, ‘There are no national frontiers to learning’. Especially in the Information Age, physics research knows no borders.”
When asked what AAPT should do to reach across international boundaries to foster collaboration and cooperation he replied,” AAPT has an active Committee on International Education, which does good work, and AAPT has on occasion acted as a sponsor or co-sponsor of international conferences, most notably for the three US-Japan-China Conferences on Physics Education.  It should certainly continue such activities.  AAPT can cooperate with other organizations in advocating changes in current visa policies which tend to discourage colleagues and students in other countries from visiting the United States.” He also stated that AAPT’s website should have links to international websites and ”AAPT can encourage individual members traveling abroad to interact with peers elsewhere by providing lists of contact persons in other countries.”
Len Jossem’s wide range of interests and passion for the teaching and learning of physics reached far beyond the classrooms of OSU and the borders of the United States. As news of his death spread, friends and colleagues shared their feelings.  Many described him as a gentleman whose wisdom inspired many, an international scholar, a champion of physics education, and a master teacher and educator in the broadest sense of the word.  Physics Today stated, “In his 90 years of life Dr. E Leonard Jossem set a standard for generations of physics students and teachers that incorporate learning through play and exploration as the pathway to understanding”. Pratibha Jolly (ICPE Chairman) said, “Len’s capacity to put things in historical and global perspective lent new dimension to discussions. Len will be missed for his commitment to the global community of physics education, his words of wisdom and his friendship toward all, even as he made each one feel special.” Minella Alarcon (Senior Programme Specialist for UNESCO)said, “Len Jossem was a good friend and resource person of UNESCO and its physics education networks, who lobbied for physics education activities in developing countries.” Nian-Le Wu (professor at Tsinghua University, Beijing) said, “The world’s physics teaching society has lost one of its pioneers, and the Chinese physics teaching community has lost one of our old friends and best collaborators.” The life and spirit of E. Leonard Jossem  was best expressed in the International Newsletter on Physics Education on the anniversary of his 70th birthday, “He is at home in schools as well as in research laboratories, he moves among students and teachers as naturally as among professors and Nobel Laureates.  To have a teaching career with such a fresh innovative spirit during half a century—this is a privilege only a few can enjoy.”