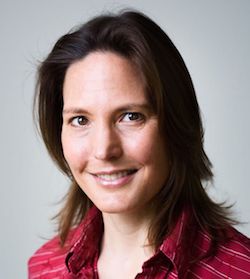 College Park, Maryland, United States, May 12, 2021—The American Association of Physics Teachers (AAPT) announced today that Helen Czerski, University College London, London, England, is the 2021 recipient of the Klopsteg Memorial Lecture Award. The lecture and award will be presented during the AAPT Summer Meeting. This award recognizes educators who have made notable and creative contributions to the teaching of physics.

Regarding her selection to receive the 2021 Klopsteg Award Czerski said, “I’m very grateful to the AAPT for recognising my work in this way. It’s always been a mystery to me that physics at school has sometimes had such a bad reputation when it’s all about playing with and understanding the world around us. What could be more fun? Everyone who looks closely at their daily lives will see all sorts of fascinating mechanisms, and it’s always been a joy to help change the way people see their world.”

Czerski is a physicist, first and foremost, but she’s acquired a few other labels along the way: oceanographer, presenter, author, and bubble enthusiast. She grew up near Manchester, in northwest England, and spent her childhood playing by the canals and along the old railway routes of the early Industrial Revolution. She studied Natural Sciences (Physics) at Churchill College, Cambridge, finishing with a first class degree. A year later, she returned to Cambridge to study for a PhD in experimental explosives physics, motivated by the opportunity to use high-speed photography to explore the physical world further.

After her PhD, she looked for a pathway that would allow her to continue to build that sort of experiment, but with an application in the natural world. That’s when she found out about bubbles and oceans. The Scripps Institution of Oceanography in San Diego was her door into that world, followed by a postdoc at the Graduate School of Oceanography in Rhode Island. She returned to the UK to start her own research program on the physics of oceanic bubbles, first at the University of Southampton and then at her current academic home, University College London.

Czerski gets particularly excited about the physics of the everyday world and the oceans. The oceans are the heart of the Earth’s engine, the system of atmosphere, rocks, ice, life and ocean that makes up our planetary life support system. Beyond the purely scientific, she is fascinated by the relationship between human civilizations and the oceans, and how these vast expanses of blue have shaped and influenced the structure of human society.

Upon her return to the UK from Rhode Island, she became a regular science presenter for BBC, in addition to her academic work. Since 2017, her column “Everyday Physics” has been a regular feature in the Wall Street Journal. Her book, Storm in a Teacup: The Physics of Everyday Life, published by W. W. Norton Company, received rave reviews from the New York Times, Wall Street Journal, The Guardian, and others.

About the Award
Named for Paul E. Klopsteg, a principal founder, a former AAPT President, and a long-time member of AAPT, the Klopsteg Memorial Lecture Award recognizes outstanding communication of the excitement of contemporary physics to the general public. The recipient delivers the Klopsteg Lecture at an AAPT Summer Meeting on a topic of current significance and at a level suitable for a non-specialist audience and receives a monetary award, an Award Certificate, and travel expenses to the meeting.