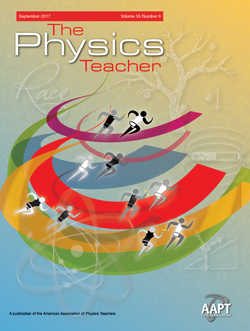 This cover image evokes the theme of this fall's special collection: "Race and Physics Teaching." The relay runners, shown over a rich backdrop of iconic physics images, appear in many shades and varieties of body types to reflect the inherent non-binary nature of race and gender, subjects that are far too often treated as strictly binary. What aspects of this mosaic speak to you as a teacher?

Articles in This Collection

Learning to Do Diversity Work: A Model for Continued Education of Program Organizers, Dimitri R. Dounas-Frazer, Simone A. Hyater-Adams, and Daniel L.Reinholz

Living Ethnoastronomy: Discovering the Connectedness of the Human Spirit Beneath the Night Sky, Richard Paul Hechter and Nayif Awad

Race and physics teaching, and the fair: A call to all physics educators for manuscripts on a rarely discussed topic, by Gary White. The original call for manuscripts, published in The Physics Teacher.

Addressing Underrepresentation: Physics Teaching for All, by Moses Rifkin, This paper an important contribution to the subject from The Physics Teacher, part of the inspiration for the call for papers,

Supporting and Enhancing Diversity and Inclusiveness in AAPT (PDF) -- Report accepted by the Board of Directors on February 18, 2017.

Donate to the Swartz Fund to support The Physics Teacher projects.