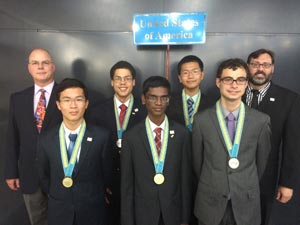 The participants representing the 2014 U.S. Physics Team were:

?"AAPT is proud to lead the selection process that identifies such exceptional student scholars. Their outstanding performance in this international competition is a reflection of the work of their coaches, the entire 2014 Physics Team, the support of their families, and the best of physics education,” said Dr. Beth A. Cunningham, Executive Officer of the American Association of Physics Teachers.

U.S. Physics Team Selection
AAPT is responsible for recruiting, selecting and training the U.S. Physics Team each year to compete in the IPHO Competition. This selection process begins in early January when high schools register their students to participate in the Fnet=ma exam. Approximately 300 top scorers on this first test will advance to the Semifinal round of competition.

?A second exam is used as the basis for selection of the 20 members of the U.S. Physics Team.  In May these students traveled from schools all over the United States, to the University of Maryland-College Park for the U.S. Physics Team Training Camp, held at the University of Maryland and George Washington University. There, they engaged in nine days of intense studying, mystery lab, daily exams, and problem solving.

At the end of that training camp, five students and an alternate were selected as the "Traveling Team" to represent the United States at the IPhO. In July, the Traveling Team and their coaches attended a three day Mini Camp of intense laboratory work before moving on to the IPhO.

Funding and Sponsorship
The U.S. Physics Olympiad Program was started in 1986 by AAPT to promote and demonstrate academic excellence. It continues to be supported as a joint initiative between AAPT, AIP, and the member societies of the American Institute of Physics: Acoustical Society of America, American Association of Physicists in Medicine, American Astronomical Society, American Crystallographic Society, American Meteorological Society, American Physical Society, AVS - Science and Technology of Materials, Interfaces, and Processing, Optical Society America, and the Society of Rheology. Additional sponsorship is provided by Cambridge University Press, E. E. Shaw & Company, Ellington Management Group, John Wiley & Sons, Inc., Pearson Higher Education, Princeton University Press, Texas Instruments, Beloit College, The George Washington University, and the University of Maryland.
Funding for the U.S. Physics Team also depends on donations from concerned individuals and organizations.  Contributions are entirely used to support the selection, training, and travel of the team.  Donations to the U.S. Physics Team are accepted at www.aapt.org/physicsteam/donate.cfm.

About AAPT
AAPT (www.aapt.org) is the premier national organization and authority on physics and physical science education —with members around the word.  Our mission is to advance the greater good through physics education. To this end, AAPT provides our members with numerous opportunities for professional development, communication, and student enrichment.