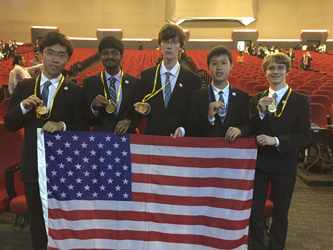 College Park, MD, July 13, 2015—The United States Physics Team tied for second place at the 46th International Physics Olympiad that was held in Mumbai India, July 5 -12, 2015. The ten day competition among the world's top high school physics students consisted of a five hour theory exam and a five hour experimental exam, as well as several cultural outgoings and visits to local Indian manufacturing industries where the best high school physics students from around the world competed.

The participants representing the 2015 U.S. Physics Team were:

The U.S. Team was led by Paul Stanley of Beloit College and David Fallest of NC State.

The United States team trains for ten days at the University of Maryland in late May. This year the five U.S. Competitors traveled to Thailand in late June to train with the team from Thailand, under the generous sponsorship of IPST.

The overall winner of the competition was Taehyoung Kim of Korea, who also scored highest in theory. The top experimental score was for Sol Kim of Korea. A special prize for top female participant was gold medal winner Thao Thi Huong Dinh of Vietnam.

"AAPT is proud to lead the selection process that identifies such exceptional student scholars. Their outstanding performance in this international competition is a reflection of the work of their coaches, the entire 2015 Physics Team, the support of their families, and the best of physics education," said Dr. Beth A. Cunningham, Executive Officer of the American Association of Physics Teachers.

U.S. Physics Team Selection AAPT is responsible for recruiting, selecting and training the U.S. Physics Team each year to compete in the IPHO Competition. This selection process begins in early January when high schools register their students to participate in the Fnet=ma exam. Approximately 300 top scorers on this first test will advance to the Semifinal round of competition.A second exam is used as the basis for selection of the 20 members of the U.S. Physics Team. In May these students traveled from schools all over the United States, to the University of Maryland-College Park for the U.S. Physics Team Training Camp, held at the University of Maryland and George Washington University. There, they engaged in nine days of intense studying, mystery lab, daily exams, and problem solving.At the end of that training camp, five students and an alternate were selected as the "Traveling Team" to represent the United States at the IPhO.

About AAPT
AAPT (www.aapt.org) is the premier national organization and authority on physics and physical science education —with members around the word. Our mission is to advance the greater good through physics education. To this end, AAPT provides our members with numerous opportunities for professional development, communication, and student enrichment.