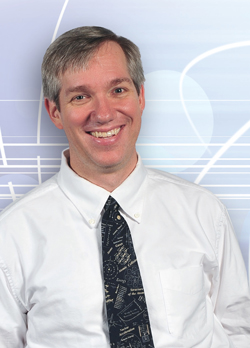 Aaron Titus to be Recognized as a 2019 Recipient of the Homer L. Dodge Citation for Distinguished Service to AAPT

College Park, MD, September 12, 2018—AAPT has announced that Aaron Titus will receive the association's Homer L. Dodge Citation for Distinguished Service to AAPT, during their 2019 Winter Meeting in Houston, Texas.

Titus is Professor and Chair of the Department of Physics at High Point University, High Point, North Carolina. He has been an active member of AAPT for 20 years and, besides the committees required as part of his Board of Directors role, he has served on the Lotze Scholarship, Physics in Undergraduate Education, and Graduate Education in Physics committees. He was elected and served as the Four-Year College Representative for AAPT from 2013-2016. In addition, he has been active in the North Carolina Section, presenting talks (several receiving awards) and workshops as well as hosting several Section Meetings. When he arrived at High Point University, there was no physics department and no physics major. Aaron was instrumental in creating a physics major as part of the Department of Chemistry. He was equally instrumental in the creation of a separate Department of Physics and he has served as its first and only Chair.

His research has been in development and research of multimedia-focused problems, where students are required to take data from an animation to solve a given problem. As a graduate student Titus co-developed WebAssign with Larry Martin. Today, he collaborates with Ruth Chabay and Bruce Sherwood on future editions of Matter & Interactions and is an advocate for incorporating computation and research into the undergraduate physics curriculum starting in the first year.

Regarding his selection to receive this citation, Titus said, "Members of AAPT have been my professional mentors for more than twenty years. For example, I met Larry Martin after my presentation at an AAPT meeting in 1996, and this relationship changed my life forever. Through service in AAPT, I hope to be as inspirational to others as they’ve been to me.”

About AAPT
AAPT is an international organization for physics educators, physicists, and industrial scientists—with members worldwide. Dedicated to enhancing the understanding and appreciation of physics through teaching, AAPT provides awards, publications, and programs that encourage teaching practical application of physics principles, support continuing professional development, and reward excellence in physics education. AAPT was founded in 1930 and is headquartered in the American Center for Physics in College Park, Maryland. For more information: Contact David Wolfe, Director of Communications, dwolfe@aapt.org, (301) 209-3322, (301) 209-0845 (Fax), www.aapt.org.