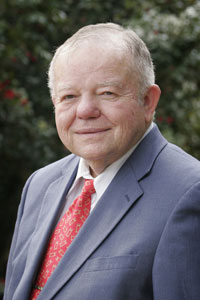 Bob Powell Named as Recipient of the 2013 Homer L. Dodge Citation for Distinguished Service to AAPT

FOR IMMEDIATE RELEASE
College Park, MD, April 15, 2013—AAPT has announced that Bob Powell will receive the association’s Homer L. Dodge Citation for Distinguished Service to AAPT during the 2013 Summer Meeting in Portland, Oregon.

Powell is Professor and Chair of Physics and Director of the Observatory at the University of West Georgia, where he is completing his 46th year of teaching.
As a member of AAPT since 1968, Powell was active in forming the Southern Atlantic Coast Section and served as its first Secretary-Treasurer.  He has served two terms as President and is currently serving as Section Representative.

Powell is a strong supporter of AAPT and its programs.  He has provided physics training for teachers across Georgia through the AAPT/PTRA program and continued to find funding for those programs through MSP and Teacher Quality grants after the Rural PTRA funding was diminished. In addition to administering these grants, he is very involved in training teachers by attending and teaching at all workshop sessions.  Powell is also concerned about the relatively few undergraduates receiving degrees in physics with certification and is leading his department in recruiting and graduating more qualified high school physics teachers.