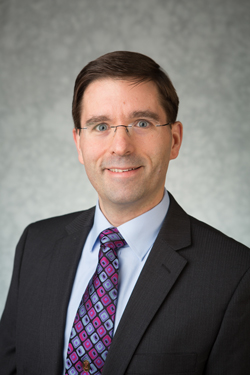 College Park, Maryland, United States, March 12, 2018 —The American Association of Physics Teachers (AAPT) announced today that Bradley S. Ambrose will receive the 2018 David Halliday and Robert Resnick Award for Excellence in Undergraduate Physics Teaching. This award is given in recognition of contributions to undergraduate physics teaching and awardees are chosen for their extraordinary accomplishments in communicating the excitement of physics to their students. John Wiley & Sons is the principal source of funding for this award, through its donation to the AAPT.

Regarding his selection for this award, Ambrose said, “To be recognized in this way is a tremendous honor!  I am deeply grateful to everyone who has helped shape my perspectives and practices in teaching, and that includes my own instructors, my colleagues in teaching and in research, and my students.  Receiving this award from AAPT inspires me to continually challenge myself and grow as a teacher.”

In nominating him for this award his colleagues said, “Brad embodies teaching excellence.  His teaching is extremely learner-centered and he reflects honestly on what works and what doesn't work. He is also very generous in sharing his expertise with colleagues both within his own department and at other institutions, as well as students whom he mentors in physics education research projects.”

The physics department at Grand Valley State University (GVSU) offers a B.S. in physics, as well as a few graduate courses in support of an M.Ed. During his time at GVSU, Ambrose has taught a variety of courses. The courses for teachers have long been taught in an inquiry-based style, but he has incorporated inquiry-based components into all of his other courses as well. His approach is student-centered, actively engaging the students in the learning process and empowering students to take the next step on their own. He is a master at asking questions to stimulate student learning, helping students solve problems themselves rather than just telling them the answers. Students and colleagues alike rate his teaching as excellent, as evidenced by his being selected for one of several campus-wide teaching awards in 2006 as well as GVSU’s Outstanding Teacher Award in 2014.

He is also an exceptionally reflective teacher committed to making changes in order to enhance student learning and uses his expertise in physics education research (PER) to develop many course materials. He worked with a team of colleagues during the summer of 2000 to revise the GVSU introductory labs from a “cookbook” approach to an inquiry-based one. More recently, he collaborated with colleagues nationwide on an NSF-CCLI grant to develop a series of tutorials in intermediate mechanics to build students’ abilities to understand multi-step processes and better connect calculations to concepts. The resulting Intermediate Mechanics Tutorials have had a remarkable impact through workshops presented to college faculty from across the nation.

Ambrose has worked with numerous GVSU physics majors on independent research projects, always to great benefit. Many of the students with whom he’s worked have gone on to high school teaching careers or graduate studies in PER, where his circle of influence is still expanding as his former students teach the next generation.

Beyond the classroom, Ambrose has been a great asset to the physics department by distributing his classroom materials to other faculty both at GVSU and nationally. Furthermore, he is always eager to work with faculty in adapting his materials to their classes and in introducing new faculty to the current pedagogies used in teaching physics that have demonstrated success in the classroom. He helps mentor new faculty by discussing the current understanding of student learning and by presenting the wide range of teaching and assessment strategies that are being developed in PER. While his mentoring is valued by all faculty, it is particularly important to those who are in the early stages of their careers, introducing them to an array of teaching methods and helping them to become excellent teachers themselves.