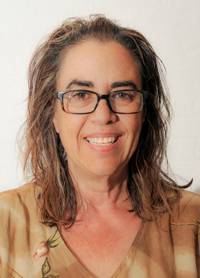 College Park, Maryland, United States, March 20, 2017 —The American Association of Physics Teachers (AAPT) announced today that Cindy Schwarz will receive the 2017 David Halliday and Robert Resnick Award for Excellence in Undergraduate Physics Teaching. This award is given in recognition of contributions to undergraduate physics teaching and awardees are chosen for their extraordinary accomplishments in communicating the excitement of physics to their students. John Wiley &Sons is the principal source of funding for this award, through its donation to the AAPT.

Regarding her seclection for this honor, Schwarz said, "I am thrilled to have been chosen for this most prestigious award that acknowledges outstanding achievement in teaching. In my case, I am glad to be recognized by AAPT for my varied and innovative contributions over the past thirty years that have gone way beyond traditional physics teaching at the undergraduate level. AAPT bestowing this award allows faculty to be affirmed when their own institutions may not have the tools and experience necessary to do so. Thank you AAPT!"

Schwarz was an early adopter of interactive teaching methods and brought many techniques, such as peer instruction, use of smartboards in the classroom, use of electronic clickers, and in-class problem solving to Vassar College and shared those methods with her colleagues. She instituted Vassar College's Physics Teacher Certification program by working closely with the Education Department in crafting a New York state-approved curriculum. She has been an active member of AAPT, and has brought students to many regional and national meetings.

For nearly 30 years, Schwarz has been an innovator in interactive pedagogies and an author of multiple books that have made an impact on physics education at the undergraduate as well as elementary and high school levels. She has been a leader and mentor to Vassar faculty members.

Schwarz has created multiple new physics courses during her time at Vassar. "Physics in Motion" is a course in which Vassar students create instructional physics videos and take them into the local community where they are presented to students ranging from 3rd graders up to high school students.

"The Subatomic Zoo" is a course using Schwarz' book, A Tour of the Subatomic Zoo. The first edition of the book won the American Library Association Outstanding Academic Book Award in 1992. A third edition was recently (2017) published as part of the IOP Concise Physics series. In the course Schwarz teaches the standard model of particle physics and accelerator science to students who are not physics majors. The course has been taught 19 times since 1987 and will be taught again next spring with the new book.

"The Limits of the Universe, The Limits of Understanding" was a cross-listed physics and philosophy course that Schwarz co-taught with a colleague from the Philosophy Department.

Schwarz is recognized for her excellent work in bringing a modern, evidence-based pedagogy to the instruction of physics at Vassar College. She has been an advocate for science literacy, finding new and exciting ways to bring physics to undergraduate non-physicists as well as K-12 students (one example is the co-authored book for 7 –11 year olds, Adventures in Atomville: The Macroscope which is available in English and Spanish). She has guided many physics majors to careers as professional educators and has been instrumental in achieving a balanced gender ratio in the Physics and Astronomy Department at Vassar College.