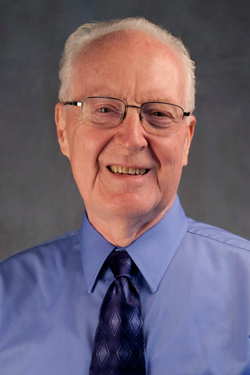 AAPT has announced that David M. Cook will receive the Robert A. Millikan Medal during the 2020 Summer Meeting in Grand Rapids, Michigan. This award recognizes educators who have made notable and intellectually creative contributions to the teaching of physics. Cook is a pioneer in computational physics education and has rendered extraordinary service to AAPT on Area Committees, the Meetings Committee, AAPT representative to AIP Governing Board, and in the Presidential Chain. He has organized a computational physics conference and led computational curriculum education projects. He has been an AAPT member since 1966.

Regarding his receipt of the Millikan Medal, Cook said, "I am honored but mostly humbled to be selected for the Millikan Medal, especially after I looked up the list of previous recipients and recognized how distinguished a group of physics educators has received this award since its inception in 1962.”

Cook received B.S. in physics in 1959 from Rensselaer Polytechnic Institute. His A.M. (1960), and Ph.D. (1965) degrees in physics were both earned at Harvard. In 1965, he joined the Department of Physics at Lawrence University, now a 1500-student liberal arts college in Appleton, WI, advancing from Assistant (1965-71) to Associate (1971-79) to Full (1979) Professor of Physics and to Philetus E. Sawyer Professor of Science (1989), and receiving the Lawrence Excellence in Teaching Award in 1990. During his 43 years on the Lawrence faculty, he taught essentially all of the courses in the typical undergraduate physics curriculum; supervised dozens of senior-level independent studies and full-time summer-long student projects; published two dozen papers and delivered over four dozen invited and contributed talks, mostly in the area of instructional uses of computers; and served in several administrative capacities.

Starting in the early 1980s, he and his colleague, John Brandenberger, committed themselves to building a strong undergraduate department that now has five full-time faculty members, graduates an average of ten physics majors each year, was a case-study department at the 1998 AAPT/APS/AIP revitalization conference, and was included among the exemplary departments reviewed in the SPIN-UP study. Cook retired from full-time teaching and research in June 2008 but maintains an office at Lawrence University and is engaged in several writing projects. Cook's research interests lie in computational physics, musical acoustics, and uses of computers in the upper-division physics curriculum. He has played a leading role in the development of the computational components of the Lawrence physics curriculum, which now includes statistical data analysis and curve fitting in the introductory laboratories, Computational Mechanics (a required sophomore course), Computational Physics (an elective junior/senior course), and numerous exercises for other physics courses.

On his first sabbatical in 1971-72, he was a National Science Foundation (NSF} Faculty Fellow at Dartmouth College, where he observed how Dartmouth physicists were incorporating time-shared computing, then a new idea, into their curriculum. Since then, he has helped guide the evolution of computer use and the computer curriculum not only at Lawrence, both within and without his department, but also, through publications, talks, workshops, and consulting activities at many other colleges and universities. He is the author of The Theory of the Electromagnetic Field (Prentice-Hall, 1975, Dover, 2003, and—in a second edition—soon to be available for free download from ComPADRE), one of the first intermediate-level physics texts to discuss numerical approaches to field plotting and trajectory problems. In the period 1978-81, he directed a faculty development project that was supported by the NSF CAUSE program and was designed to guide and support Lawrence science and social science faculty in their self-development of uses of computers for scholarship and teaching. In 1990 (before the present burgeoning of interest in using computational resources in upper-level physics), Cook organized a Sloan-supported conference that brought twenty active teacher/scholars to Lawrence, and he contributed to, edited, and published the proceedings of that conference. He served as associate editor of Computers in Physics from 1994 to 1998, and he served a three-year term (1991- 94) as a member of the Committee on Computers in Physics Education of the American Association of Physics Teachers.

Between 1988 and his retirement in 2008, with support from two grants from the NSF (1988, 1993), three grants from the W. M. Keck Foundation (1988, 1994, 2002), and Lawrence University, Cook directed an extensive curricular development project that has created a departmental environment in which physics majors become expert at using state-of-the-art computing resources intelligently and independently. In support of this endeavor, he built the Lawrence Computational Physics Laboratory, which, is currently equipped with twelve Linux workstations that make numerous software packages for graphical visualization, numerical analysis, and symbolic algebra available to students 24/7. The project attracted national attention and has been described in several publications and in invited talks given by Cook at several national meetings, colleges and universities. In February, 2000, he received an NSF grant supporting the assembling of the extensive instructional materials developed at Lawrence into a flexible and customizable textbook titled Computation and Problem Solving in Undergraduate Physics, which was completed in January, 2003, continues to be used at several colleges around the country, and is now available for free download from ComPADRE. That NSF grant also supported the holding of four week-long summer workshops that brought a total of 70 college faculty members from around the United States for an intensive exposure to the way in which Cook helps Lawrence students become skilled in the use of computational resources.

Just before his retirement in June of 2008, Cook was elected Vice-President of the American Association of Physics Teachers, serving successively as Vice-President, President-Elect, President, and Past President. His four-year term came to an end in February of 2012. In that capacity, he has also served on several AAPT Advisory Committees, as chair of the AAPT Review Board, Awards Committee, and Committee on Governance Structure. and as AAPT representative to the AIP Governing Board, the APS Council, the APS/FEd Nominating Committee, and the APS/FEd Executive Committee. In January 2013, he embarked on a three-year term as chair of the AAPT Meetings Committee.

About the Award The Robert A. Millikan Medal recognizes those who have made notable and intellectually creative contributions to the teaching of physics. The recipient delivers an address at an AAPT Summer Meeting and receives a monetary award, the Millikan Medal, an Award Certificate, and travel expenses to the meeting.