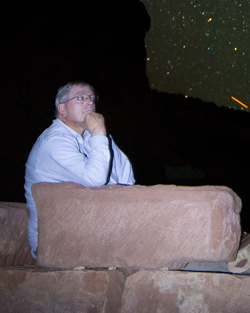 Duane Merrell to be Recognized as a 2017 Recipient of the Homer L. Dodge Citation for Distinguished Service to AAPT

When notified of this award, Merrill said, "Thank you, but are you sure, there are many others that AAPT should recognize, but again thank you."

From 1985 –2004 he taught high school at Snowflake High School in Arizona and Emery High School in Castle Dale, Utah. In 2004 he accepted a position at Brigham Young University. The physics teacher preparation program that Merrell has created there has been very successful in increasing the number of new physics teachers produced each year since 2006.

In addition to Merrell's leadership in the area of physics teacher preparation programs, he has played a significant role in the advancement of physics teaching in a number of other areas. He has been a stalwart PTRA, not only presenting dozens of in-service workshops to over a thousand teachers across the US, but also providing hands on support each summer during the annual PTRA summer training workshops for other PTRAs. Merrell also is a member of the American Modeling Association, Modeling training workshops during summer cohorts in Western State College, Colorado and at UC Davis, California.

He has also organized and conducted physics teacher's workshops each summer for the Utah State Department of Education for almost 25 years. Essentially every physics teacher in Utah has attended at least one of Merrell's in-service workshops. In addition to this he has made time to serve as the executive secretary of the Utah State Science Teachers Association for the past 16 years.

He has been recognized repeatedly for his exceptional classroom teaching, receiving some of the highest teaching evaluations from his students. Recognition for his excellence in physics teaching has been recognized with the Physical Science Teacher of the year for Utah (1995), Emery School District Teacher of the Year (1991) Governor's Medal for Science and Technology (1998), Outstanding Physics Teacher for the state of Utah (2000). Merrell is also the recipient of the U.S. Presidential Award for Science Teachers, awarded in 1994 by President Bill Clinton.