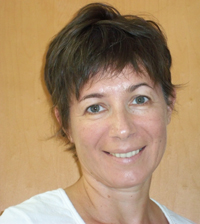 College Park, MD, March 6, 2014—AAPT has announced that Eugenia Etkina will receive the 2014 Robert A. Millikan Medal during the 2014 Summer Meeting in Minneapolis, MN. This award recognizes educators who have made notable and creative contributions to the teaching of physics.
Eugenia Etkina started her teaching career as a high school physics teacher in Moscow, Russia, where she taught for 13 years before coming to the US. In 1995-1997 she taught physics courses for at-risk students at Rutgers University. In 1997 she received her Ph.D. in physics education from Moscow State Pedagogical University and was appointed an assistant professor at the Rutgers University Graduate School of Education.  She became an associate professor in 2003 and a full professor in 2010 and served as the chair of the Department of Learning and Teaching from 2011 to 2014.
Since 2003 she has been running one of the largest programs in physics teacher preparation in the United States. Professional learning community of the program graduates now has over 60 physics teachers. Her pivotal role in sustaining and expanding this community is evidenced by the moniker that her New Jersey physics teachers use for themselves. Tens of Etkinists drive up to an hour after school to meet every two weeks and share dilemmas of practice with her and each other. Etkina is involved in reforms in undergraduate physics courses and in the professional development programs for in-service middle school science and high school physics teachers.
She is a co-creator of the Investigative Science Learning environment (ISLE) - an approach to teaching and learning physics that helps students learn physics by engaging in activities that mirror the practice of physics. She is also a co-author of a newly published ISLE-based textbook College Physics and a companion Active Learning Guide. Together with her colleagues and students (now in-service teachers) she developed the Physics Union Mathematics (PUM) curriculum that is used in middle and high schools to help students learn physics through ISLE.
An AAPT member since 1997, Etkina has 32 years of experience in physics and astronomy instruction at middle school, high school, and university levels.  She has served AAPT on the Focus Group on the Draft Framework and on the 2013 AAPT Sponsored Discussion Group Response to Achieve on the Next Generation Science Standards Second Draft.
She served as a Chair of the Committee on Teacher Preparation and as a Chair of the Physics Education Research Leadership Organizing Council (PERLOC), and was a member of the Nominating Committee, and a member of the National Task Force on Teacher Education in Physics. She also conducted more than 20 workshops for the AAPT members at the National and regional meetings. Since 2000 she has ran over 80 workshops for physics teachers.  All these activities underscore Etkina’s passion and advocacy for high quality physics education. A sought-after collaborator, she has worked tirelessly and in numerous capacities to promote research-validated approaches to improving student learning in physics.
In addition to the AAPT Distinguished Service Citation that she received in 2012, Etkina has been recognized with the 2012 New Jersey Distinguished Faculty Showcase of Exemplary Practices Award, 2011 Rutgers University Graduate School of Education Alumni Association Outstanding Faculty Teaching Award, 2010 Rutgers University Warren I Susman Award for Excellent Teaching, and the 2007 Rutgers University Graduate School of Education Alumni Association Outstanding Faculty Research Award.
In her nomination past AAPT President, Jill Marshall recognized Etkina’s accomplishments, noting that she “has been a major force within physics teaching, teacher preparation, and AAPT. She has been instrumental in developing and spreading the concept of Pedagogical Content Knowledge (PCK) in physics, and in creating and implementing professional development focusing on PCK. She is a recognized leader in physics teacher preparation and in the development of student centered curriculum, particularly for future teachers. She has been a tireless workshop presenter for our organization and others.”
About the Award
The Robert A. Millikan Medal, established in 1962, recognizes teachers who have made notable and creative contributions to the teaching of physics. The recipient is asked to make a presentation at the Ceremonial Session of an AAPT Summer Meeting. A monetary award, The Millikan Medal, an award certificate, and travel expenses to the meeting are presented to the recipient.
Previous Awardees
2013, Harvey Gould, Clark University, Worcester, MA
2012, Philip Sadler, Harvard-Smithsonian Center for Astrophysics, Cambridge, MA
2011, Brian Jones, Colorado State University, Fort Collins, CO
2010, Patricia M. Heller, University of Minnesota, Minneapolis, MN
2009, Arthur Eisenkraft, University of Massachusetts, Boston, MA
2008, Eric Mazur, Harvard University, Cambridge, MA
2007, David R. Sokoloff, University of Oregon, Eugene, OR
2006, Art Hobson, University of Arkansas, Fayetteville
2005, John S. Rigden, Washington University in St. Louis, MO
2004, Kenneth S. Krane, Oregon State University, Corvallis
Additional winners
About AAPT
AAPT is an international organization for physics educators, physicists, and industrial scientists—with members worldwide. Dedicated to enhancing the understanding and appreciation of physics through teaching, AAPT provides awards, publications, and programs that encourage teaching practical application of physics principles, support continuing professional development, and reward excellence in physics education. AAPT was founded in 1930 and is headquartered in the American Center for Physics in College Park, Maryland. For more information: Contact Marilyn Gardner, Director of Communications, mgardner@aapt.org, (301)209-3306, (301)209-0845 (Fax)