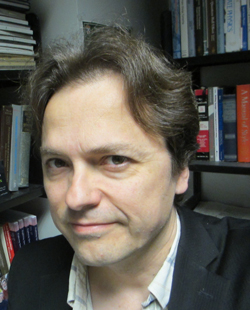 Spalding is Professor of Physics at Illinois Wesleyan University where his recent work has utilized holographically textured fields to trap and manipulate matter. Besides being a past member and Chair of the AAPT Committee on Laboratories, he has been active on multiple AAPT committees as either a committee member or friend of the committee. He has been an organizer or contributor to a session at nearly every AAPT semi-annual national meeting for years. He has also been active behind the scenes and on task forces and subcommittees, and served on the AAPT Nominating Committee during 2012-13.  His time and energy support advances in physics education and lab education in particular.

In July 2012, he chaired the conference on laboratory instruction Beyond the First Year (thereby introducing the “BFY” acronym) at the University of Pennsylvania and Drexel University. This was an extremely unusual opportunity for hands-on exposure to a broad assortment of contemporary instructional labs appropriate to Modern Physics Labs, Electronics, Optics, Advanced Labs, as well as key instructional labs in Statistical Physics, Condensed Matter and Materials Physics, Quantum Mechanics, etc. At the same time, the conference served as an opportunity to discuss a range of curricular models that allow for enhancement of the undergraduate physics major. Organizing this particular conference was a logistic tour de force.

Regarding his selection to receive this award, he said, “The powerful thing about participating in our professional organization, AAPT, is the degree to which all of us, working together, make a difference. It is very satisfying to be a part of this particular community.”