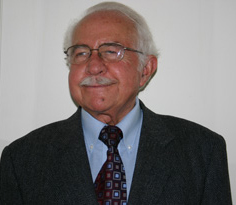 Garcia is Professor of Physics Emeritus at The University of Arizona in Tucson. Throughout his career, his Research interests included time-dependent quantum models for collisions, quantum electrodynamics, physics education research, and improving science teacher education.  He earned his Ph.D. in Physics at the University of Wisconsin.  His career has included a Fulbright Scholarship in Germany, and a NORDITA Fellowship in Sweden. Garcia is a Fellow of the APS and was the recipient of the APS' Bouchet Award.  He has served as a Program Officer in the Division of Undergraduate Education at the National Science Foundation, was the Charter President of the National Society of Hispanic Physicists (NSHP), and has just finished a term as President of the Society for the Advancement of Chicanas and Native Americans in Science (SACNAS).