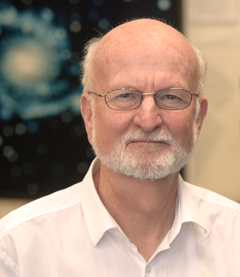 College Park, MD, September 1, 2015—John W. Belcher has been named as the 2016 recipient of the prestigious Hans Christian Oersted Medal, presented by the American Association of Physics Teachers (AAPT). The Medal will be awarded at a Ceremonial Session of the 2016 AAPT Winter Meeting, in New Orleans, Louisiana, in recognition of his outstanding, widespread, and lasting impact on the teaching of physics through his tireless work with TEAL (Technology Enabled Active learning) and Massive Open Online Courses (MOOCs). In connection with the award, Belcher will deliver a talk on "The Challenges of Pedagogical Change at a Research I University."

Belcher joined the faculty at Massachusetts Institute of Technology (MIT) in 1971 to work with Professors Herbert Bridge and Alan Lazarus, who had the plasma probe on board Mariner 5. Just after he arrived, the MIT Space Plasma Group wrote a proposal for the Voyager mission to Jupiter and Saturn. After reaching these two planets, as well as Uranus and Neptune, Voyager is still going strong, with an expected demise in 2031. In its most recent incarnation, it is referred to as the Voyager Interstellar Mission.

In 2004, MIT awarded Belcher the Class of '22 Professorship, designed to honor "a tenured faculty member with a record of excellence in education, with respect to both curriculum development and classroom teaching." He was the Associate Chair of the MIT Faculty in AY 2013-2014. He is an MIT MacVicar Faculty Fellow.

The Oersted Medal recognizes Belcher's efforts to introduce an active learning format into the main-stream physics introductory courses at MIT.  Technology Enabled Active Learning (TEAL) is a teaching format that merges lectures, simulations, and hands-on desktop experiments to create a rich collaborative learning experience. As a result of the TEAL project, MIT has replaced its main-stream two-semester freshman physics sequence (the largest subjects at MIT) with studio-mode classes, where students work collaboratively on laboratory work in a computer-rich environment. The TEAL group has also developed an extensive suite of simulation and visualization software for electromagnetism, which is being distributed across the world through MIT OpenCourseWare.

His subsequent developmental work with Massive Open Online Courses (MOOCs) has enabled educators to expand their outreach beyond the classroom, making the content available to many more students.

Remarking on his selection for the Oersted Medal, Belcher said, "I am delighted to join the ranks of Oersted Medal winners. Dr. Peter Dourmashkin of MIT was a major contributor to the creation and success of TEAL effort. I am also delighted to acknowledge my debt to the pedagogical innovators who led us to TEAL. Without the pioneering efforts of Jack Wilson and Karen Cummings at Rensselaer Polytechnic University in the mid-1990s, and Robert Beichner's SCALE-UP at North Carolina State University, TEAL would never have come into existence.  I would also like to acknowledge my debt to my wife Dr. Lori Breslow of MIT, who suffered with me through the difficult early days of TEAL, and who taught me everything worthwhile that I know about education. "

About the Award
The Oersted Medal is named for Hans Christian Oersted (1777-1851), a Danish physicist who, in the course of creating a demonstration for teaching his class, discovered that electric currents cause a magnetic field. This was a crucial step in establishing the theory of electromagnetism so important in building modern technology and modern physics. The award was established by AAPT in 1936 and is given annually to a person who has had outstanding, widespread, and lasting impact on the teaching of physics.Some previous Oersted award winners are Karl Mamola, Dean Zollman, George F. Smoot, Mildred S. Dresselhaus, Carl Wieman, Lillian McDermott, Hans Bethe, Carl E. Sagan, Edward Purcell, and Richard Feynman. The complete list of recipients can be found at http://www.aapt.org/Programs/awards/oersted.cfm.