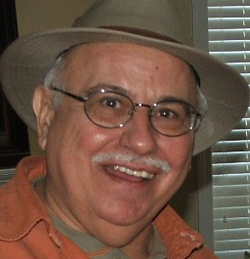 Jose D'Arruda to be Honored with a 2018 Homer L. Dodge Citation for Distinguished Service to AAPT

College Park, MD, March 21, 2018—AAPT has announced that Jose D'Arruda, Pembroke Professor of Physics at the University of North Carolina Pembroke, will receive the association's Homer L. Dodge Citation for Distinguished Service to AAPT, during the 2018 Summer Meeting in Washington, DC.

D'Arruda earned his B.S.in Physics and Mathematics at the University of Massachusetts, Lowell. His M.S. and Ph.D. in Physics are from the University of Delaware. A member of AAPT since 1975, D'Arruda has been active in the North Carolina Section. He served as Section Representative (2003-2006) and was elected to the Presidential Chain in 2006, serving for three years. He has been a leader in physics education, working at a regional campus serving in one of the poorest areas of the state with a high percentage of Lumbee Indians.

His service to AAPT includes membership on the Committee on Minorities in Physics (2000-2002), articles published in The Physics Teacher and American Journal of Physics, and presentations at numerous North Carolina Section meetings and AAPT national meetings. In 2014 he received The John L. Hubisz Award for Outstanding Service to the North Carolina American Association of Physics Teachers.

In nominating him for this award his colleagues said, "Jose D'Arruda's contributions to the teaching of physics and astronomy are truly exceptional. Over his 47 years of teaching, 44 of these years at UNCP, he has had a great impact on advances in physics/astronomy and STEM education at the national, sectional, local and international level. Among his many contributions during his 22 years as department chair he established a degree program in applied physics and a regional science fair. He has received numerous honors and awards for his service to the physics learning community including the Board of Governors Award for Excellence in Teaching, the highest teaching award by the UNC system, the North Carolina Science Teacher Distinguished Service to Education Award and the North Carolina Science, Mathematics, and Technology (SMT) Education Center Award for Outstanding 9-16 Educator Award. His related publications, synergistic activities, and university wide service clearly demonstrate his commitment and dedication to science education. The numerous workshops he has presented at AAPT and other educational organizations have had far reaching impacts on the teaching of physics, astronomy, and STEM education at all levels from K-12, two-year community/technical colleges, as well as traditional four year colleges and universities."