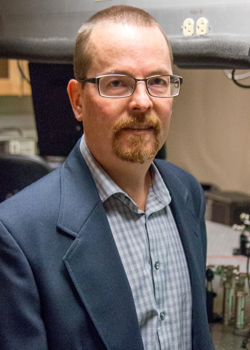 College Park, Maryland, United States, October 2, 2017—The American Association of Physics Teachers (AAPT) announced today that Mark Beck has been selected to receive the 2018 Richtmyer Memorial Lecture Award. Beck is recognized with the award for outstanding contributions to physics and for effectively communicating those contributions to physics educators. The award will be presented at a Ceremonial Session of the AAPT Winter Meeting in San Diego, California.

Beck is Benjamin H. Brown Professor of Physics and Chair of the Department of Physics at Whitman College in Walla Walla, Washington. He earned his B. S. and Ph.D. in Optics at The Institute of Optics, University of Rochester, Rochester, New York.

Regarding his selection as the Richtmyer Memorial Lecture Award Beck said, "I'm honored to receive this award from the AAPT, and humbled to be associated with those who have received it previously. I'd like to thank my mentors, colleagues and students, as I've learned a great deal from all of them."

In 1994 Beck took a visiting faculty position at Reed College because of his attraction to teaching and working with undergraduates on research. During his time at Reed he began working with students on modern quantum optics experiments. In 1996 Beck moved to Whitman College, and shortly after that he, and others, realized that advances in laser technologies, nonlinear optics and electronics were on the verge of making it possible and affordable to construct apparatus to perform fundamental experimental tests of quantum theory in an undergraduate teaching laboratory.

Beck and several of his undergraduate students designed and produced such apparatus and, with it, tested quantum mechanical predictions in teaching laboratories. In addition to demonstrating the single-photon nature of light emitted in certain nonlinear-optical experiments, his students were able to verify that local realism is violated in Hardy's test, providing strong support for the quantum nature of the physical world. These tests also served to demonstrate quantum entanglement, a uniquely quantum feature, which underlies efforts to build quantum computers. The fact that undergrads could see for themselves the quantum nature of light, and learn modern optical techniques at the core of quantum information science, was revolutionary.

Beck published these experimental setups in several influential peer-reviewed papers, which were some of the first documented instances of undergraduates successfully performing such experiments.

He currently holds the Benjamin Brown Professorship, which is named and endowed in honor of a much-respected member of Whitman's Physics Department who received AAPT's Oersted Medal in 1939. That Beck holds this position is particularly apropos as he, like Brown before him, has made significant contributions to the teaching of physics, the most important being his role in reformulating the approach to teaching Quantum Mechanics.

Beck has been acknowledged at Whitman College as a master teacher and received two in-house awards, the Garret Fellowship and the Lange Distinguished Teaching Award. He has been active in the Northwest Chapter of the APS and is a member of the Distinguished Traveling Lecturer Committee for APS's Division of Laser Sciences.

Beck has become a prominent contributor to efforts to reformulate the teaching of Quantum Mechanics, and has authored a textbook that takes a new approach to the subject. He has proven himself a gifted and highly productive educator. He has contributed to the discipline at his home institution, nationally, and even internationally. His work to allow the tenets of Quantum Mechanics to be taught more effectively is exactly the sort of transformative effort that must be encouraged, then acknowledged and rewarded as our discipline seeks to assert its continued relevance in an ever more rapidly changing world.

A colleague at Whitman College remarked, "Beck's single greatest accomplishment is a reformulation of the teaching of undergraduate Quantum Mechanics. His intellect and vision allowed him to develop instrumentation, curricular materials and an accompanying text all of which have been popularly received and are becoming widely used. He is a talented physicist and consummate teacher who has made substantial, creative contributions to the teaching of physics at the local, regional and national levels."

About the Award
The Richtmyer Memorial Lecture Award is given in memory of Floyd K. Richtmyer, distinguished physicist, teacher, and administrator. Professor Richtmyer was one of the founders of AAPT and served as its president. As a teacher, author, research worker, and dean, he was the guide for many young physicists who became leaders of American science and has had a wide influence on the development of physics in the United States. The award has been given since 1941 to a person who has made outstanding contributions to physics and effectively communicated those contributions to physics educators. The previous recipients of the Richtmyer Award include Jay M. Pasachoff, Sir Michael Berry, Brian Greene, Kathryn Moler, Vera Rubin, Alex Filippenko, Arthur H. Compton, Enrico Fermi, Philip Morrison, Steven Chu, Sheldon Glashow, Kip Thorne, and Steven Weinberg. The complete list of winners can be found at http://www.aapt.org/Programs/awards/richtmyer.cfm.