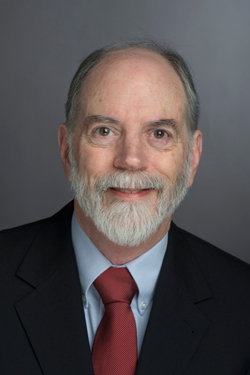 Robert Teese to be Honored with a 2019 Homer L. Dodge Citation for Distinguished Service to AAPT

College Park, MD, September 25, 2018—AAPT has announced that Robert Teese will receive the association's Homer L. Dodge Citation for Distinguished Service to AAPT, during their 2019 Winter Meeting in Houston, Texas.

Teese is a pioneer in the use of video analysis. He initiated and directs the LivePhoto Physics project, which published a book of video-analysis activities for introductory physics courses and is currently developing Interactive Video Vignettes for physics and biology courses. This project has held frequent workshops for university and high-school teachers at AAPT meetings, including multi-day workshops.

A professor in the Department of Physics at the Rochester Institute of Technology, Teese got his B.S. in physics at North Carolina State University in Raleigh. His M.A in Experimental Physics and his Ph.D. in Theoretical Physics were both earned at the University of Texas.

He has been an AAPT member since 1987, serving on the Committee on Educational Technologies, presenting at AAPT Summer and Winter Meetings, and supporting several AAPT education funds.  Additionally, he served as Treasurer of the Southern Ohio Section of AAPT.

Regarding his selection to receive this citation, Teese said, “I am honored to accept the Homer L. Dodge Citation. However, I feel as if I should be the one giving AAPT the award!  The association has been an important part of my professional life since I began teaching. I am grateful to be able to give back to it.”