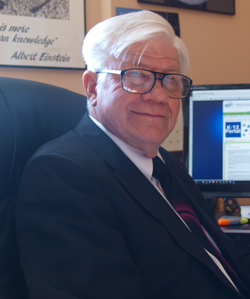 Warren W. Hein to be Recognized as a 2018 Recipient of the Homer L. Dodge Citation for Distinguished Service to AAPT

Hein, Adjunct Professor of Physics at Kettering University in Flint, Michigan, served as both the Associate Executive Office (AEO) and Executive Officer for AAPT prior to his retirement in 2010. His service to AAPT and the physics community stretches well beyond his duties when he was in these positions with AAPT.

Hein had been an outstanding faculty member for many years before he came to the national office as AEO. He was department chair, SPS advisor, recognized for his outstanding service at his university both for his teaching and for his service. Hein was a founding member of the South Dakota Section of AAPT and served as a section officer for many years. He has served the AAPT in a variety of ways after retiring as the EO of AAPT. He has worked with the PTRAs, served on New Faculty Workshop and PhysTEC Noyce Advisory committees and is chairing The Barbara Lotze Scholarship for Future Teachers Committee.

Responding to his selection to receive this Citation, Hein said, "My membership in AAPT is the best investment I could have made to further my physics education career.  Serving as AAPT AEO and EO resulted in so many opportunities to serve and work with outstanding physics educators that I would never have a chance to meet and I now think of them as friends and.colleagues. Receiving this citation for service from my fellow physics educators and the association that has been so important to me is especially meaningful."