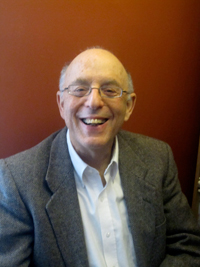 FOR IMMEDIATE RELEASE
College Park, Maryland, United States, February 22, 2013—The American Association of Physics Teachers (AAPT) announced today that Harvey Gould is the 2013 recipient of the Robert A. Millikan Medal. This award recognizes educators who have made notable and creative contributions to the teaching of physics. The Medal will be presented during the AAPT Summer Meeting in Portland, Oregon.

Gould has been a pioneer in computational and statistical physics education. Throughout his career, he has worked to develop collaboration and communication among his colleagues while supporting the common good, making unique and important contributions to the community of physicists and physics educators.

He earned his A. B. and Ph.D. in physics at the University of California, Berkeley and did postdoctoral work at the National Bureau of Standards (now NIST). After four years at the University of Michigan, he began teaching at Clark University, Worcester, MA in 1971. In the early1980s he made important contributions in the development of computer simulations for undergraduate physics lecture and laboratory courses, and, in particular, developed a laboratory-based course on computer simulation at the undergraduate and graduate levels. For the last three decades he has done research in condensed matter physics, statistical physics, and computational physics. Most recently his research has focused on the dynamics of first-order phase transitions with a particular interest in nucleation, as well as critical slowing down and earthquake fault systems.

Gould has shared his knowledge of the use of computers and computer simulations in physics education. In the ‘90s he participated in the Consortium for Upper-level Physics Software (CUPS) Project, which led to the publication of Thermal and Statistical Physics Simulations coauthored with Lynna Spornick and Jan Tobochnik. Of particular note are his undergraduate textbooks, Introduction to Computer Simulations Methods, coauthored with Wolfgang Christian and Jan Tobochnik, and Statistical and Thermal Physics, coauthored with Tobochnik. Both books have inspired physics teachers throughout the world to incorporate computers and computer simulations in their courses.

As co-editor with Jan Tobochnik of the Computer Simulation column in Computers in Physics and Computing in Science and Engineering for over ten years, Gould has had a positive impact on many physics teachers. The column and his textbooks have helped many teachers transition to making computation an integral part of their undergraduate physics teaching. He is, in no small measure, responsible for the enormous growth in the use of computers in physics education during the last 25 years.

As Associate Editor of the American Journal of Physics for ten years, he edited approximately 1000 articles and played an active and effective role in improving manuscripts to make them more accurate, readable, and understandable.

The first Gordon Research Conference on Physics Research and Education, which brings together research scientists, faculty, physics education researchers, and students around a specific topic, was initiated and co-chaired by Gould and Tobochnik. These conferences were followed by the 1999 launch of theme issues of American Journal of Physics that are tied to the Gordon Conferences.

Regarding his selection as 2013 Millikan Medal recipient, Gould said, “I have been very lucky to have had a job for many years that I enjoy. I also have been fortunate to have colleagues and collaborators who have made my life both fun and rewarding.”

About the Award
The Robert A. Millikan Medal, established in 1962, recognizes teachers who have made notable and creative contributions to the teaching of physics. The recipient is asked to make a presentation at the Ceremonial Session of an AAPT Summer Meeting. A monetary award, The Millikan Medal, an award certificate, and travel expenses to the meeting are presented to the recipient.