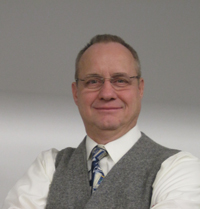 FOR IMMEDIATE RELEASE
College Park, Maryland, United States, March 1, 2013—The American Association of Physics Teachers (AAPT) announced today that the 2013 Paul Zitzewitz Excellence in Pre-College Physics Teaching Award winner is Thomas F. Haff, a high school physics teacher from Seattle, Washington. This award is in recognition of contributions to pre-college physics teaching and awardees are chosen for their extraordinary accomplishments in communicating the excitement of physics to their students.

Haff earned his BA and M.Ed from the University of Washington. He began teaching in 1976 at Mercer Island High School.  He taught at several high schools and at Edmonds Community College before taking a position at Issaquah High School in 1996. He is a National Board Certified Teacher.

The Washington Section of the American Association of Physics Teachers honored Haff with an Outstanding High School Teacher Award Oct. 9, 2010 at its state meeting. This is the first time the chapter has given the award, and it will now be called the Tom Haff award, in honor of its first recipient.

Haff epitomizes the qualities most desired in a teacher. He is an enthusiastic, expert teacher; he explains physics so the subject comes alive for students, inspiring them to seek and grasp a deeper level of understanding. He truly understands that his job is not only to teach science concepts to his students; rather to instill in them a curiosity and enthusiasm for learning science. He is an effective mentor, providing opportunities for students to interact with physics educators and physicists at local and national meetings. He immerses himself in his physic classes. He ran his AP physics, for nine years, after school hours so all students in the district would have an opportunity to participate. His passing rate was well over 98% on the AP exam and his students did exceptionally well on the college level.
He consistently applies for grants so that he can keep the curriculum up-to-date with new text books and supplies, supports his students with personal letters in their college applications, and supports their efforts to obtain summer internships after graduation.

Haff noted, “When it is all said and done….the bottom line…whether we build a new building or buy a pencil…. It is about the kids….bottom line.”