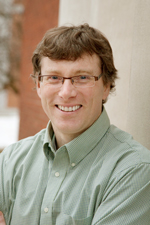 College Park, Maryland, United States, March 1, 2013 — The American Association of Physics Teachers (AAPT) announced today Michael Jackson is the recipient of 2013 David Halliday and Robert Resnick Award for Excellence in Undergraduate Physics Teaching. This award is given in recognition of contributions to undergraduate physics teaching and awardees are chosen for their extraordinary accomplishments in communicating the excitement of physics to their students. John Wiley & Sons is the principal source of funding for this award, through its donation to the AAPT.

During his career Jackson has established an exceptional record of accomplishments in all three key aspects of a faculty member’s responsibilities (instruction, scholarship, service). He is an excellent and popular teacher who has accumulated a superior record of peer-reviewed scholarship while carrying out sustained contributions to the university, profession, and community, all while serving as a transformative chair for CWU’s physics department during a particularly challenging and demanding period for the department and the university.

While serving as the chair of his department, Jackson typically teaches a full load of undergraduate courses at both the introductory and upper division levels as well as teaching in and contributing to CWU’s NSF funded Science Talent Expansion Program (STEP), and teaching a range of other credit bearing courses. He is highly regarded by the faculty and staff in the department and the college for his commitment to, success in, and championing of highly effective teaching. Qualitative and quantitative Student Evaluation of Instruction survey results and other assessments of his teaching have consistently portrayed Jackson as an exceptional and dynamic instructor who is deeply invested in student learning and is constantly seeking out and applying best practices techniques.

He was hired by the CWU physics department and the university with the intent of transforming a relatively typical “sleepy” small undergraduate physics department into a vibrant model program using recently developed recommendations and best practices from the American Association of Physics Teachers. During a period in which university resources allocated to his program actually declined, his efforts succeeded beyond anyone’s expectations as demonstrated by remarkable growth in the numbers of declared and graduating physics majors, burgeoning demand for physics classes, development of innovative programs and classes meeting student needs, the engagement in and commitment to his vision by physics students and faculty, student opportunity, and a variety of other measures.

In addition to classroom instruction, Jackson has maintained an outstanding record of mentoring undergraduate research projects including mentoring students in CWU’s competitive and demanding Science Honors Research Program. His students have routinely presented at CWU’s annual Symposium on University Research and Creative Expression (SOURCE) and have also presented their work at the professional level including peer reviewed publication.

Beyond the classroom, Professor Jackson has engaged the general public and K-12 students through a variety of outreach programs. From rockets and solar observing to the construction of kaleidoscopes, these programs were designed to spark and interest in physics and science. Every year in September he has also given physics demonstrations and a laser light show for elementary and middle school students. Over the past four years he has built on this foundation, turning it into a week-long event that he coordinates. During the week of “Science is Central,” students visit CWU science departments to learn about current events in science, and to see and participate in science demonstrations. Public lectures on topics in physics, biology, chemistry, and geology are given every evening during the week. Science is Central reaches over 800 elementary and middle school students and their teachers each year with up to 200 participants for the public shows. In total, Professor Jackson, “the laser show guy”, has made public presentations to more than 5,000 people in central Washington.

In nominating him for this honor, his colleagues noted his singular dedication to the craft of effective physics teaching, boundless energy, enthusiasm, and good humor in the service of excellence in physics education. His leadership inspires others to emulate his exemplary teaching and commitment to effective physics teaching which he integrates into every aspect of his efforts including beyond the classroom, e.g., public outreach, research, facility planning. Additionally, they note his demonstration of the effectiveness of AAPT SPIN-UP strategies in developing thriving undergraduate physics programs, and the inspiration his example can provide to members of AAPT.