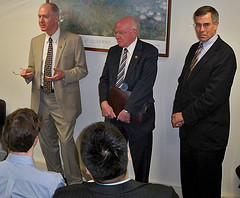 College Park, MD (May 26, 2010) – The top 20 physics students in the country met today with their congressional representatives and the three members of Congress who are also physicists. Rep. Rush D. Holt (D-NJ-12th), Rep. Vern Ehlers, (R-MI-3rd), and Rep. Bill Foster (D-IL-14th), were honored by the students for serving as role models for students entering scientific professions.

For ten days the students study advanced physics principles, take exams and hear lectures from prominent physicists at the University of Maryland in College Park. Five students from the U.S. team will be chosen to represent the U.S. at an international physics competition.

But the time at camp is not only spent on physics: the students also visited the nation's capital to meet with their senators and representatives. This helps them learn to communicate important science to legislators and others who don’t usually hear about science. The in-person meeting helps remind members of Congress of the importance of science and math education in the U.S.

The students gave their Congressional Representatives and Senators a kinetic yo-yo, a toy that uses the physics principle of conservation of momentum and energy. The toy carried a flyer that urged legislators to keep up the momentum for science and math education.

About AAPT
AAPT is an international organization for physics educators, physicists, and industrial scientists—with more than 10,000 members worldwide. Dedicated to enhancing the understanding and appreciation of physics through teaching, AAPT provides organizational and sponsorship support to the U.S. Physics Team in partnership with the American Institute for Physics and its member societies(http://www.aip.org/aip/societies.html).