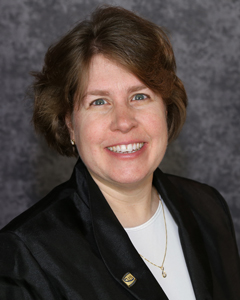 2015 Homer L. Dodge Citation for Distinguished Service to AAPT will be Presented to Kathleen Harper

College Park, MD, March 17, 2015—AAPT has announced that Kathleen A. Harper will receive the association's Homer L. Dodge Citation for Distinguished Service to AAPT, during the 2015 Summer Meeting in College Park, Maryland.

Harper, Senior Lecturer, Engineering Education Innovation Center, The Ohio State University, is currently serving as Chair of the AAPT Nominating Committee and as Section Representative for the Southern Ohio Section of AAPT.

She earned her B.S.E. in Electrical Engineering and Applied Physics and her MS in Physics from Case Western Reserve University in Cleveland, Ohio. Her Ph.D. from The Ohio State University was in physics with emphasis in physics education research.

Her AAPT service includes the Nominating Committee, including working as chair this past year. She is a member of the Membership and Benefits Committee and has served on the Committee on Research in Physics Education. A member since 1994, Harper has been the Southern Ohio Section Representative since 2007. She has also been a very active member of the PER community within AAPT. As one component of this work she has co-edited, with Charles Henderson, a series of "Getting Started in Physics Education Research" talks and articles. The talks have been presented at the summer national meetings and the articles have then been published on the ComPADRE website.

Regarding her selection to receive this award, she said, "I am truly honored to receive an award that has already gone to so many of my personal AAPT heroes. It is impossible to imagine what my career, or indeed, my life would be like without being a member of AAPT. I have learned so much and made so many remarkable friendships as a result, and no amount of service to the organization will ever equal what I get from it."