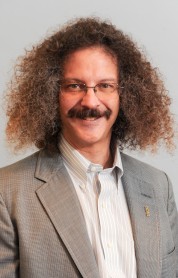 College Park, Maryland, United States, March 22, 2016 —The American Association of Physics Teachers (AAPT) announced today that Andy Gavrin will receive the 2016 David Halliday and Robert Resnick Award for Excellence in Undergraduate Physics Teaching. This award is given in recognition of contributions to undergraduate physics teaching and awardees are chosen for their extraordinary accomplishments in communicating the excitement of physics to their students. John Wiley & Sons is the principal source of funding for this award, through its donation to the AAPT.

Gavrin earned his B.S. in Physics at the Massachusetts Institute of Technology and his M.A. and Ph.D. in Physics at The Johns Hopkins University. While at The Johns Hopkins University he began his teaching career as a TA and did research in superconductivity and magnetic phase transitions. During his time at Indiana University – Purdue University Indianapolis (IUPUI), Gavrin has been instrumental in improving STEM education in Indiana through a variety of projects funded by the NSF, the NIH, and the Lilly Foundation.

Since arriving at IUPUI in 1995, he has devoted a great deal of effort to creating ways to improve physics teaching, including "Just-in-Time Teaching (JiTT)". This method, developed in collaboration with Dr. Gregor Novak (IUPUI), Dr. Evelyn Patterson (US Air Force Academy), and Dr. Wolfgang Christian (Davidson College) has been highly successful by several different standards. As stated on Gavrin's Physics Education website, "The JiTT method succeeds through a fusion of high-tech and low-tech elements. On the high-tech side, we use the World Wide Web to deliver curricular materials and expand communications among faculty and students. On the low-tech side, we rely on a classroom environment that further stresses interaction among students, faculty and student mentors. The interplay between these elements engages students and promotes learning. The underlying method is to use feedback between the Web and the classroom to increase interactivity, and to allow faculty to make rapid adjustments to address student’s problems."  This work was published in the influential book Just-in-Time Teaching: Blending active Learning and Web Technology (Novak, GN, Patterson, ET, Gavrin, A, and Christian, W (1999), Saddle River, NJ: Prentice Hall). Since then JiTT has spread to all of the STEM fields as well as others including economics, history, English, French, philosophy, journalism, nursing, music, psychology, sociology, and writing. Gavrin has led sessions on JiTT at the AAPT Physics and Astronomy New Faculty Workshops for the past ten years and offers extensive instructor-support for JiTT on his IUPUI website.

In addition to his work with JiTT, Gavrin has led efforts focused on increasing the numbers and diversity of students pursuing degrees across the STEM fields. These efforts include the "Bridges to the Baccalaureate in Central Indiana" program. Funded by the National Institutes of Health and the Lilly Foundation, the "Bridges" program is a collaborative effort between IUPUI and Ivy Tech Community College that supported minority students through the completion of their associate’s degree and transfer to a bachelor’s degree program. Most recently, Gavrin has begun to study the use of social media in physics teaching in collaboration with Ali Jafari, developer of the Course Networking system. CN, as it is known, is an innovative “academically-focused” social media platform designed to encourage students’ connections to one another within and beyond the bounds of a single course. Gavrin and other collaborators are working to find ways to use CN to improve their students’ levels of engagement with the course material, and with one another.