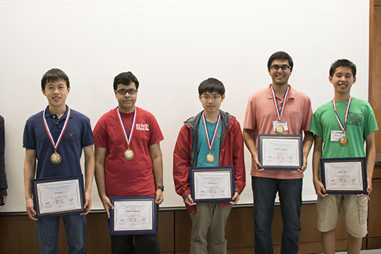 June 6, 2016, College Park, MD — Five students have been selected to represent the U.S. Physics Team as the 2016 Traveling Team at the 47th International Physics Olympiad, a competition among high-school physics students, to be held July 10 –18, 2016 in Switzerland and Liechtenstein. They will be accompanied by coaches Paul Stanley and David Fallest. The Traveling Team members are:

"The selection of the travelers was extremely difficult.  These five team members will represent the U.S. Physics Team and the United States  very well, keeping with the tradition of bringing home medals and honoring the teams of the past 30 years." said Academic Director, Paul Stanley. "I would have been happy to travel with them all but the rules of the International Physics Olympiad required that we choose five."

The students attended a rigorous training camp at the University of Maryland, where, through classes, labs, and special lectures, they were coached on difficult physics concepts, and then took a series of exams. They also made a trip to nearby NASA headquarters in Washington D.C. and joined U.S. Physics Team alumni, coaches, academic directors, parents, and friends of AAPT at the 30th Anniversary of the U.S. Team celebration.

MORE ON THE WEB
Main website of the U.S. Physics Team: http://www.aapt.org/physicsteam/2016/

History of the physics team, including past winners: http://www.aapt.org/physicsteam/2016/program.cfm

ABOUT AAPT
AAPT is an international organization for physics educators, physicists, and industrial scientists—with members worldwide. Dedicated to enhancing the understanding and appreciation of physics through teaching, AAPT provides awards, publications, and programs that encourage teaching practical application of physics principles, support continuing professional development, and reward excellence in physics education. Founded in 1930, the Association is headquartered in the American Center for Physics in College Park, Maryland.