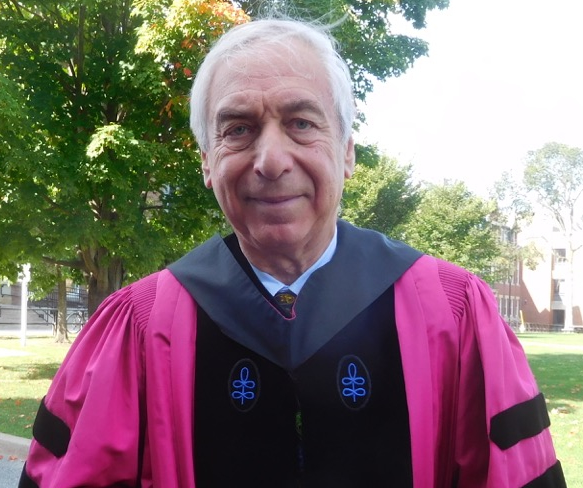 College Park, Maryland, United States, September 28, 2016—The American Association of Physics Teachers (AAPT) announced today that Jay M. Pasachoff has been selected to receive the 2017 Richtmyer Memorial Lecture Award. Pasachoff is recognized with the award for outstanding contributions to physics and effectively communicating those contributions to physics educators. The award will be presented at a Ceremonial Session of the AAPT Winter Meeting in Atlanta, Georgia.   At 7:30 pm on Sunday, February 19, Pasachoff will deliver a talk entitled "Observing the Great American Eclipse of August 21, 2017." The event will be the 66th solar eclipse he has observed, and he will also discuss some of the scientific results from the most recent eclipses. Pasachoff is an astronomer and is Field Memorial Professor of Astronomy at Williams College and the author of textbooks and tradebooks in astronomy, physics, mathematics, and other sciences.

After the Bronx High School of Science, he studied at Harvard, receiving his bachelor's degree in 1963, his master's degree in 1965, and his doctorate in 1969. He worked at the Harvard College Observatory and Caltech before going to Williams College in 1972.

Pasachoff is a Fellow of the American Physical Society, the International Planetarium Society, the American Association for the Advancement of Science, Committee for Skeptical Inquiry, and the Royal Astronomical Society, and he has held a Getty Fellowship. He is a member of the American Astronomical Society and is past chair of its Historical Astronomy Division. He has lectured widely, including a stint as a Sigma Xi Distinguished Lecturer. He is also Director of the Hopkins Observatory and past (in rotation, most recently 2014–2015) Chair of the Astronomy Department at Williams.

Pasachoff has received several awards for teaching and the popularization of Astronomy through his writing of textbooks. To name two, Pasachoff received the 2003 Education Prize of the American Astronomical Society, "For his eloquent and informative writing of textbooks from junior high through college, For his devotion to teaching generations of students, For sharing with the world the joys of observing eclipses, For his many popular books and articles on astronomy, For his intense advocacy on behalf of science education in various forums, For his willingness to go into educational nooks where no astronomer has gone before, the AAS Education Prize is awarded to Jay M. Pasachoff,"  and Pasachoff received the 2012 Prix-Jules–Janssen from the Société Astronomique de France, "for your outstanding research, teaching and popularisation of Astronomy, in the spirit with which Camille Flammarion created the award back in 1897."  In addition, Pasachoff has been active in educational and curriculum matters. He is U.S. National Liaison to, and was President (2003–2006) of the Commission on Education and Development of the International Astronomical Union, has twice been Chair of the Astronomy Division of the American Association for the Advancement of Science, and has been on the astronomy committees of the American Astronomical Society (and its representative 2004–2017 to the AAAS), the American Physical Society, and the American Association of Physics Teachers.

About the Award
The Richtmyer Memorial Lecture Award is given in memory of Floyd K. Richtmyer, distinguished physicist, teacher, and administrator. Professor Richtmyer was one of the founders of AAPT and served as its president. As a teacher, author, research worker, and dean, he was the guide for many young physicists who became leaders of American science and has had a wide influence on the development of physics in the United States. The award has been given since 1941 to a person who has made outstanding contributions to physics and effectively communicated those contributions to physics educators.The previous recipients of the Richtmyer Award include Sir Michael Berry, Brian Greene, Kathryn Moler, Vera Rubin, Alex Filippenko, Arthur H. Compton, Enrico Fermi, Philip Morrison, Steven Chu, Sheldon Glashow, Kip Thorne, and Steven Weinberg. The complete list of winners can be found at http://www.aapt.org/Programs/awards/richtmyer.cfm.