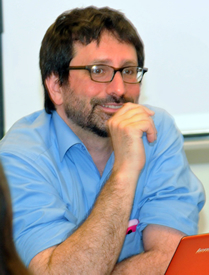 Mel S. Sabella to be Recognized as a 2016 Recipient of the Homer L. Dodge Citation for Distinguished Service to AAPT

Sabella earned his BS in Physics at Binghamton University (SUNY) and his Ph.D. in Physics at the University of Maryland in College Park, Maryland. He worked as a Postdoctoral Research Associate at the University of Washington in the Physics Education Group before his current appointment at Chicago State University - a majority African American institution on Chicago's south-side. At Chicago State University, he has implemented PER based instructional materials into the physics program and developed a multi-discipline Learning Assistant (LA) Program to support students at CSU. He has been an advisor to physics majors, an Assessment Coordinator for the physics program, and a co-advisor of the Society of Physics Students and the CSU S-STEM Scholars Program for Chemistry and Physics majors.  Sabella also started the Science Fair Central - South Program at CSU which supports students in Chicago in developing Science Fair Projects.

Sabella has said, "My membership in AAPT has been an essential piece of career building: it is the main conference for the professional community that I belong to.  AAPT is where I learn about new research in my field, connect to and collaborate with colleagues, and have an opportunity to talk about my work. The vast majority of my current collaborations have come from interactions at either the national AAPT meetings or our local Chicago and Illinois section meetings. AAPT is also where I get inspired. I often get so excited at AAPT meetings that I arrive back to my home institution wanting to incorporate everything I've learned! Incorporating everything takes time and I've learned over the years that I need to bring back one or two items and make changes to my teaching and research slowly and reflectively."