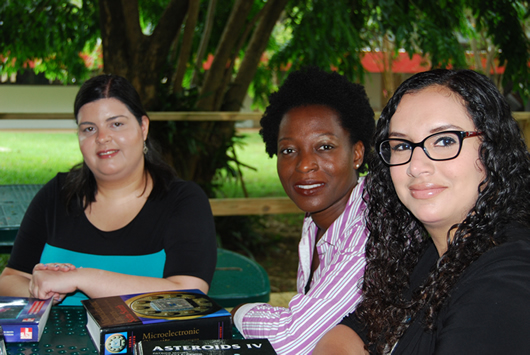 COLLEGE PARK, MD (May. 18, 2017) — Armed with a $3 million National Science Foundation grant to encourage more women to pursue careers in physics, researchers are heading back to high school.

Zahra Hazari, an associate professor of physics education in the STEM Transformation Institute and Department of Teaching & Learning at Florida International University, will lead a team of researchers from FIU who are partnering with Texas A&M University – Commerce, the American Physical Society (APS) and the American Association of Physics Teachers (AAPT). They will unite 16,000 high school physics teachers behind a movement – a movement where each physics teacher will recruit at least one female student to pursue a physics major in college.

"We could accomplish something that’s never been done in history," Hazari said. "We could change the face of physics in the United States."

Today, the field is typically dominated by men in the United States. "The critical transition is from high school to undergraduate education.  We know that half of students taking introductory physics as undergraduates are women yet only 20% end up graduating with bachelors degrees in physics," notes Beth Cunningham, AAPT Executive Officer and co-principal investigator.  "High school teachers are critical in encouraging women to consider careers in physics.  AAPT will play an important role with our connections to the high school physics teacher community." Rebecca Vieyra, AAPT K-12 Program Manager and principal investigator states, "This project recognizes the impact that high school physics teachers can have on their students, especially in terms of helping them to understand that a degree in physics is accessible to them."  In addition, only 8 percent of bachelor's degrees awarded to women were in science, technology, engineering and math (STEM) fields, according to a 2016 STEM index produced by defense giant Raytheon and U.S. News and World Report.

The first phase of the project, slated to start with the new school year in August, will involve 10 teachers from urban, suburban and rural schools who will pilot the program. They will ensure that the lessons and best practices such as recognizing students who solve difficult problems or having students request help from successful women in their physics classrooms can be adapted for students throughout the country.

By 2018, the campaign will expand to 24 teachers. If all goes as planned, there will be a nationwide rollout by 2019 with a targeted goal of reaching 16,000 physics educators – or about 60 percent of all high school physics teachers.

If only one-third of the nation's high school physics teachers recruited at least one female student to pursue a physics major, the nation's gender gap in STEM careers could be sharply alleviated, Hazari said.

"We could achieve the largest increase of women in physics in any decade in history," Hazari said. "It's very exciting to encourage women to participate in physics when they might not have considered it before and they may be perfect, they might have a love for physics they never knew existed."

At the conclusion of the project in 2020, researchers will have more data to determine how their methods might be applied to other STEM fields, including engineering, where women traditionally have been underrepresented.

About AAPT: AAPT is a professional society of physicists and physics educators dedicated to enhancing the understanding and appreciation of physics through teaching. This grant project is directly aligned with the AAPT's strategic goal to "Enrich the field by increasing the number and diversity of physics students and teachers at all levels, including those from ethnically and linguistically diverse backgrounds, those with diverse abilities, and those from the LGBT+ community." The AAPT currently supports a number of efforts to break down obstacles to the access and success for women in physics, including the HERStories Project (http://www.aapt.org/resources/Herstories.cfm) and eAlliances (ealliances.aapt.org). To learn more about the AAPT’s efforts to recruit and support women physicists, visit aapt.org.