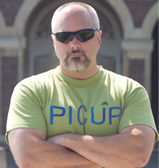 I started out in college as an electrical engineer, but soon switched because I found it sort of boring.  I was good in physics so I became a physics major, and thoroughly enjoyed myself for the next three years. One highlight as an undergrad was being made to do a project involving a computational solution in my second semester theoretical mechanics course. Dr. James Garner was the professor who taught the course.  Few people probably realize that after Rockford Files he became a physics professor.  He is now the department chair at the University of North Florida.

The computational project we were forced to do was my first opportunity to do scientific computing (using a computer to solve a physics problem), and it made a very deep and lasting educational impression on me.  I realize how geeky this is going to appear, but I found the computational approach to solving physics problems much more fun that working problems via the old-fashioned, non-computational mathematical way.  So much fun, in fact, that I considered the prospect of going into some theoretical group in grad school, and doing computational physics all the time.

In grad school, I very quickly realized that I didn’t have the intellectual goods to do theory.  But, I knew how to use a wrench and I could turn on a power supply, so I cast my lot as an experimental surface scientist.  For the next 20 years, I delved into atomistic processes, surface diffusion, and structural formation at the nanoscale, mainly working with metallic atoms condensed on semiconductor surfaces.

It turns out, my dream of doing computational physics did not have to die!  I soon found that my chosen experimental field was really some kind of glorified, nanoscopic archaeology. Even though I built (or rather, caused to be built) these small structures that I imaged and studied, I had little true idea about what actually happened at the atomistic scale during their formation. I thus called on my computational physics interest and began to model the experimental results, and thereby was able to achieve a deeper understanding of the physics behind the observations.

The modeling and simulations I was doing in my research was so engrossingly fun (yes, it is as sickeningly nerdy as it sounds) that upon becoming a professor I began integrating computation into my courses from day one. Some of you might wonder when "day one" was, but I'm not going to tell you the exact date as I'm very insecure about disclosing my age-my nickname in the PICUP group (see below) is undeservedly "grandpa." Let's just say I started teaching physics as a professor about the same time as the advent of the Pentium processor.  I suppose that gave it away.  At any rate, I've been integrating computational activities into my courses for a long time. And I'm still at it. In fact about a decade or so ago, I threw in with a couple of retired physicists and helped to create the Partnership for Integrating Computation into Undergraduate Physics (PICUP).  If you haven’t heard of us, what rock have you been hiding under?  Seriously, we think we know what we’re doing with regards to making a positive impact on the undergraduate physics curriculum nationwide, and we just happen to put on the best workshops this side of the cheese curd capital of Wisconsin.  Go ahead and have a look around our website at www.gopicup.org-we think you’ll like what you see.  And we would love to have you join us. Why not try to make it out to our workshop this summer?

As a result of my PICUP involvement, I have gotten reacquainted with AAPT.  I was a member for quite a while back in history, and I was the president of the Illinois Section in 2002.  But, I got away from the AAPT for a period while I was focused on research.  Now, I am very glad to be a part of all things AAPT again, and I and my fellow PICUPers very much appreciate the support for our project we have received from the AAPT leadership, as well as from the larger AAPT community (I should probably also give a quick shout-out to the NSF here!).  The PICUP would not have been as successful over past few years if it weren’t for AAPT support.

Well, that's my story and I'm sticking with it. In closing, I would just like to say that I really don't have any regrets regarding my decision to become an experimentalist.  But, I often think that if I had decided to stick it out as a theorist, I would have chosen to be an experimental one.  At least I would have included a lot of computation.