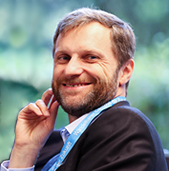 I grew up in Western Germany under a moon that was populated by the Apollo Program. Everybody was looking skywards. On the television sets, German professors lectured about rocket science using footage of American scientists and engineers as background. It was clear that humankind was on a great journey and American researchers were on the leading edge. It was understood that German technology and German-sounding names like Werner von Braun and Einstein played an important role, too. This made me proud to be somehow part of the game, which was the only thing I longed for.

Europe in the 1970s had a lot of walls and boundaries. They were frightening and annoying. But the sky was free, wide open. It was made accessible by American science, technology, and creativity - with a couple of international contributions.

It took years for me to find out what went wrong in history - that Germany used to be a leading nation in physics, aeronautics and space science but lost its leadership for being racist and putting the interests of Germans above other nations. And that this eventually led to the walled box called Western Germany in which I was growing up.

When I started to study physics in the early 90s, the box sprang open and the fascination of international cooperation literally jumped on me. Professors, assistants and graduate students were traveling to the USA and coming back with impressive results. Their research in Solid State Physics and Giant Magnetoresistance led to larger and larger hard disks, faster and more capable computers and eventually the World Wide Web. In this world of falling walls and crumpling borders, we could accomplish everything by learning and working together.

Things have changed in the recent decades. But when Genaro Zavala invited me as a speaker at the 2012 AAPT Winter Meeting in New Orleans, my sky opened and the 90s feeling was back again. Today, I see AAPT as a powerful network of researchers and practitioners. By the sheer number of well-connected, creative and intelligent members, it is leading the way to better physics education on this planet, much like the Apollo program spurred interest in science back in the 70s.

A key benefit of AAPT is the tight integration of research and teaching (Germans call this “Humboldt’s Ideal”) and the connection of teaching in University, college, primary and secondary school level. You cannot get this integration by attending international scientific conferences, because you will not find so many school teachers there. School conferences on the other hand are typically a local event that do not attract international researchers. So neither of them provide the whole picture of teaching physics the way AAPT does.

I believe that just as with the Apollo program, international contributions can play an important role to reach our target. This is what motivates me to be a part of AAPT’s mission.

In this way, I seek to give back something of what I received as a little kid in Germany, limited by walls around me, but boundless, connected and inspired whenever my eyes reached into the sky.