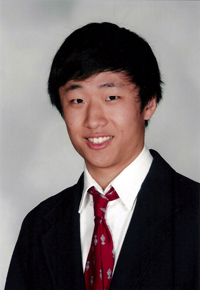 The Tacoma Narrows Bridge, a seemingly sturdy structure made of steel and solid concrete, buckled and crumbled before my eyes. Seeing a video of this 1940 collapse-an example of aeroelastic flutter-made a significant impression upon me and sparked my interest in physics at a young age. In fact, as far back as I can remember, I have always been captivated by physics and physical reactions. And this passion has been encouraged by my family and school.

I was born and raised in sunny Southern California. Since the age of 3, I attended St. Margaret's Episcopal, a very nurturing preschool-through-grade-12 school, in San Juan Capistrano where the swallows return to the mission each spring in keeping with legend. Growing up in this laid-back town, I devoted a lot of time to puzzles, construction toys, and sports. While I loved playing soccer and golf, I found that in both sports, I had a definite edge as a result of my familiarity with basic physics and geometry, when it came to estimating distances, angles, and force.

During my elementary school years, I began to accelerate in math, and by the time I was in 7th grade, I was taking AP Calculus BC to help quench my thirst for knowledge. Eager to learn more math, I moved on to Multivariable Calculus, Linear Algebra, Abstract Math, and Differential Equations at UC Irvine, where I happened upon the related field of mathematical biology. Working with Prof. John Lowengrub in the Department of Mathematics, I have been exploring the effect of motility and contact inhibition on tumor viability using the Cellular Potts Model in a discrete simulation.

In addition to venturing into biology, I was most curious to explore chemistry and physics. I advanced and qualified for the US National Chemistry Olympiad for the past two years. My curiosity about physics came much earlier, back in 7th grade, when I took AP Physics B and was captivated. When I finally arrived in high school, I was eager to participate in the U.S. Physics Olympiad in my freshman year. After two years of making it to the semi-finals, I am glad to have the opportunity to be on the US Physics Team this year.

Physics fascinates me because the more I learn, the more the world around me makes sense. In addition to understanding why a huge bridge such as the Tacoma Narrows can fall to a 40 mph wind, I especially like the fact that physics still leaves so much room for new discovery. Thus, I am hoping to become a contributor to the US Physics Team in the near future and to physics in general in the long term.

I would like to thank all my teachers for their support, my advisor Mr. Boyle for encouraging me to explore, and my Physics teacher Mr. Ingalls for helping me to see the beauty of physics. Lastly, I thank AAPT for this thrilling opportunity. I look forward to meeting everyone and learning more physics at the camp!