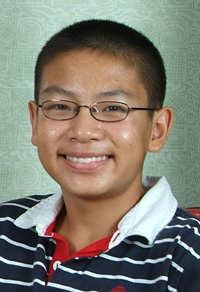 I was born in Beijing, China, and I moved to the United States at the age of two. I remember being very interested in reading/language as a kid, and learned English to the extent that I lost most of my Chinese. One of the first books I got around to reading was a mathematics textbook. Naturally, after having read this book, I excelled in math in elementary school. I also got interested in competition math, namely the AMC 8/10/12 series. Eventually, as I got exposed to ARML and the AIME and other such problem solving competitions, I deepened my knowledge of mathematics and took the USAMO. I also went to AwesomeMath summer camp, and saw Allen Yuan and Patricia Li there.

I have been playing violin since I was 5, and currently enjoy it very much. I am a member of the California Youth Symphony, and have also played in the El Camino Youth Symphony. I like classical music in general except for piano music. I also play Ultimate with my schoolmates around once a week during lunch, and practice hitting each other on days when we don't play.

I got interested in physics last year with the physics team. As a freshman, I took the USAPhO test but didn't even get into the quarterfinals. Last year, as I studied physics for my science bowl team, I gained a sense of basic physics knowledge through Feynman's Lectures on Physics. I was quite surprised at making the team, but ended up having a great experience at Physics camp and learning enough material to get me on the Traveling Team last year. I went to Merida, Mexico and brought back a gold medal. This year, I'm hoping to do even better in Croatia.