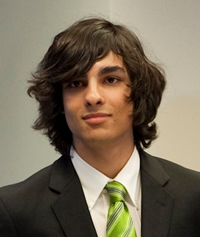 Physics has been something of an acquired taste for me. I spent a great many of my childhood days wandering the halls of the UMD physics building - the very same place where our physics camp classes will be held - marveling at the bizarre contraptions I sometimes glimpsed behind closed lab doors, trying to understand five words of the publications that were tacked up on every bulletin board, and quivering in delight at the occasional "4/4/4 DANGER" NFPA safety diamond. Often I would run back to my father's office to report observations or ask questions, generally gaining some encouragement or learning a bit of something in the process. (I do distinctly recall having the concept of "hole mobility" explained to me well over a decade ago.) To four year-old me, being a theoretical physicist seemed like one of the best possible occupations on earth. As I once told my dad, "you get to play on the computer, write on your pads, talk on the telephone, and draw on the blackboard all day!"

Constant exposure to physics from a young age and the ready availability of physics resources made me eager to learn about the field as a child. My math was good enough that I was able to take on rudimentary projectile motion in elementary school, but I was confused by the disconnect between the physics that I knew (usually concerned with a ball being launched off a cliff) and the physics that I saw being done (at the time, often involving the strangely-named material GaAs). Thus, I had an early awareness of the difference between academic physics taught in classrooms and physics research conducted in labs and offices.

My interest in physics has endured to this day even as I have become aware of the possibilities offered by other disciplines. At every stage of my development, physics had stood as the explanation to many of my questions. In third grade, I was fascinated with how electronic devices work and took to ripping them apart in my garage; physics explains the operation of circuits. In seventh grade, I was blown away by the massive power of modern jet engines; physics explains that, too. When I reached high school, I had an outstanding teacher, Mr. James Schafer, who filled all his classes with both rigorous theory and hands-on demonstrations of myriad physical phenomena. To me, physics offers the right balance of quantitative analyticity and real-world (one might even say 'physical') relevance. I have run my school's physics team for the past two years, using sparks, explosions, and loud noises as instruments to spread passion for physics to a broad cross-section of students. I also took part in experimental condensed matter research last summer at Harvard, where I will return this fall to study economics and - unsurprisingly - physics.