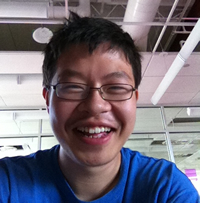 I'm someone who asks a lot of questions. Ever since I was young I've asked interesting questions like "Why am I specifically me?" to which I have not exactly been able to answer. It wasn't until I was 12 years old that I started believing in God and trusting in Him. I realized only someone like God could change my heart and mindset so drastically and rapidly, and I became a Christian soon after.

Becoming a Christian didn't directly answer, reduce or change my questions, but it provided me with a mindset in which everything became clearer. I believe everything has a purpose, and God has a plan. Best of all, I have a sense of security that answers exist to every question.

I was first interested in physics in 7th grade when I got a kinetic yo-yo from somewhere (it's one of those toys with plastic balls that spin around and collide into each other) and tried to apply what I learned in science to explain why one ball stopped moving when another started. It took me almost two years before I finally understood it, and then my comprehension of physics grew after that. My physics teacher, Mr. Field, introduced me to this competition in my freshman year, and I've taken it every year since.

Last year at Physics Team Training Camp, we were given kinetic yo-yos (and I learned for the first time that they're called "kinetic yo-yos") to give to our congressmen, and there were some leftover for us to play around with. Seeing this toy again was one of the many parts of camp that reminded me of how I became interested in physics in the first place. As a result, physics camp remains in me as one of the most memorable experiences, and I look forward to coming again.

Also, I like Chinese food (and similar foods like Korean, Japanese, and Vietnamese), so if you ever feel like having some, feel free to invite me.