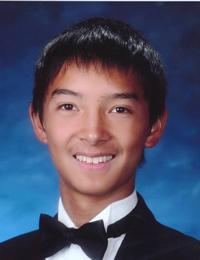 I'm glad to be back on this year's Physics Team! I look forward to reuniting with friends from last year as well as meeting new faces, playing more pieces on U of M's off-tune piano between classes, and embarking on field trips through Maryland and beyond.

After last year's camp, I went on to attend the Math Olympiad Summer Program for three weeks, followed by a summer physics internship at Harvard. Like Physics Camp, both were incredibly exciting and eye-opening experiences. For my research, I studied crystals of dipoles that form at ultracold temperatures, a model that is being used to test theories of many-body quantum systems. On the side, I also found myself exploring downtown Boston, the Charles River, and the endless choice of good restaurants in the Square. I've decided to attend Harvard starting in the fall, and plan to major in physics.

A light senior year schedule has given me some freedom to explore new interests and find what I most enjoy doing with my time. Starting in December, I organized a trip for my school's math team to compete in the Harvard-MIT Math Tournament. It was a lot of planning from start to finish, but we had a great time and even finished in ninth place! Right now, I've been learning the basics of iPhone app programming, and am hoping to create a product with some friends.

I love physics for its elegance and ubiquity. Last year's physics camp has given me tools with which I can observe and model the world around me, and it is surprising all the results that can be deduced through just a few calculations. As one example, my family spent our winter vacation in Israel, and in one of the souvenir shops, my sister and I got attracted into playing with the tops, seeing who could keep one spinning the longest. After watching them spin through countless cycles, I started wondering how the precessional frequency depended on the various parameters of the top, and worked it out later during our trip. Thankfully, it wasn't quite as difficult as the problems from camp, and I was intrigued that I could ask a question about a phenomenon I had observed and have it come out to such a simple result.

I'm excited to return to Physics Camp, and would like to thank my parents for encouraging me and Mr. Dunbar for his wonderful AP C Physics class. I would especially like to dedicate my page to Mrs. Winkler, who organized the Physics Olympiad at my school last year. Over the summer, I was shocked to hear that she passed away due to cancer, because she hadn't mentioned a word to any of her students. As I reread the message she sent me after hearing I had qualified for last year's camp, it was hard to imagine that she was struggling even as she wrote those loving words. Mrs. Winkler's resilience and love for her students have become a profound source of inspiration, and I'm honored to be able to represent her and my school community again on the Physics Team.