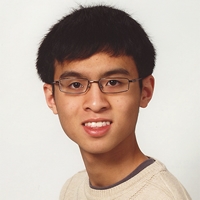 I wasn't so interested in physics until I learned that it explained everything in the world. (At least, it's the best explanation we have right now, and if someone were to explain it more fully, then that would fall right under the heading of physics.) Chemistry and biology - those were the more intriguing things when I was younger: the mechanisms that make humans work, the reason paper burns but not salt, the chemical composition of anything you care to name. And then, of course, I learned that they were all approximations of physics on a macro scale.

The most fundamental areas of physics right now all deal with quantum mechanics and general relativity and such. But I still find it fascinating to work with the basics, the parts that don't require years of college math. Systems of Newtonian mechanics are like puzzles - there is not really a straightforward algorithm that lets you brute force all the answers. Various aspects of electromagnetism also surprise me in their elegance; for example, the electric field falls off as the inverse square, as if there were a spherical wave of electric field propagating outwards. Electric circuits have a special elegance as well, owing to the surprising fact that in capacitors, the voltage drop is proportional to Q; in resistors, to the first derivative of Q; in inductors, the second derivative of Q. Right now, I am learning about "relativistic" electromagnetism - retarded potential and such. I used to think that physics would just be a bunch of basic equations that could easily be used to figure everything out. Not so, I learned; there is a lot of ground to cover!

I have been helped by many people in my progress so far. To name a few: my parents, who have cultivated my interest in math and science since I was very young; my fourth grade teacher, Mrs. Bivaletz, who provided me with my first exposure to physics through lots of good videos; and my AP Physics teacher, Mr. Gilmore, whose class built me a solid foundation in mechanics and electromagnetism, and who personally provided me with a trove of physics problems and helped explain more advanced concepts.

I am looking forward to meeting everyone this summer!