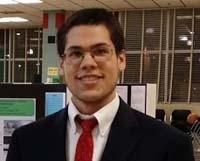 From an early age, I excelled at mathematics. I was learning algebra and long division earlier than most of my peers. I especially enjoyed word problems and logic puzzles. For my birthdays and at Christmas my parents would give me workbooks, puzzle books, or review books on algebra and trigonometry and I often found their presents to be the best.

I passed up an opportunity to attend a middle school magnet program, so this interest went into the background during that time. This afforded me the opportunity to discover my love for choral singing and to gain some experience doing musical theater, and I am doubtful that I would have gained the same had I been in a magnet then.

The first year of high school was pivotal, however: I decided to take up the opportunity to attend a high school magnet, and the magnet's freshman physics course taught by Mr. Schafer shifted my focus. It felt like being in early elementary school again, where I was able to absorb the concepts and relations more easily than most. I realized that much of my mathematical ability was based on physical intuition and that physics may be where my future studies lay.

Sophomore year I began attending meetings of our school's Physics Team, and there I learned all sorts of techniques in addition to getting a taste of advanced topics such as Lagrangians and quantum mechanics. Somehow I made it to the USAPhO semifinal round that year, but my shaky multivariable calculus and lack of preparation saw me do poorly. This sparked an intense period of independent study in all areas of physics, primarily electromagnetism, throughout junior year. I came closer to this camp than before, but was still not good enough. That summer I did a research project in the quantum mechanics area, and I found the exploratory research to be a good complement to the independent study of existing physics.

This year I have been co-captaining the Blair Physics Team along with former (and current) USAPhO finalist Mike Winer, and we have gone through the basics in addition to going a bit into rigid body rotations and statistical mechanics. A very special highlight from this year was being one of the four seniors selected by Mr. Schafer to go on a one week trip to CERN in late January. We were given an extended tour by researchers there, and due to the maintenance we were able to go into the tunnel of the Antiproton Decelerator as well as stand on the platform overlooking the CMS detector.

Finally making the camp this time around is a wonderful way to round out my high school physics experience. I would like to thank the American Association of Physics Teachers for running the series of competitions; my parents for their continual support; the students and teachers at the Science, Mathematics, and Computer Science Magnet Program at Montgomery Blair High School, as provided by Montgomery County Public Schools, for the nurturing academic environment; and especially Mr. Schafer and former and current Blair Physics Team members for the guidance and inspiration in physics.