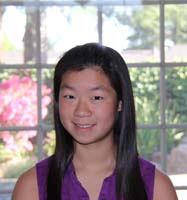 I was first introduced to the beauty of problem solving in the 7th grade when I decided to try my hand at the MathCounts competition series. I realized that I enjoyed the creative aspect of math, and how math problems are solved by exploration and cleverly applied knowledge rather than overpowered application of techniques. In the years since then, I have become increasingly interested in olympiad proofs that require both skill and intuition, traits that are gradually improved over time.

In all of the experiences that I've had up until now, I would say that one of the most substantial is having the opportunity to reach out to middle school students who are interested in math. I help hold lectures for our district's middle school math club in hopes of inspiring them to increase their mathematical knowledge and develop a long-standing passion for math. I believe that introducing STEM subjects to students at a younger age can help them grow to enjoy what many view as "daunting" or "intimidating," hopefully changing the way people feel about math and the sciences.

I began to explore physics because of the close ties that it shares with math, requiring the same frame of mind and logical analysis that is such an integral part of both subjects. To my pleasant surprise, I excelled in this area, qualifying as a semifinalist in the first year that I took the F=ma contest. Physics interests me because of the amazing way its concepts all fit together, and how they relate to the real world: thermodynamics with its applications to engines and refrigerators, magnetism and it's unexpected relation to electricity - the connections between different areas of physics are so abundant, and many have not even been discovered! Learning physics has really changed the way I view the world by explaining my experiences in a perspective that I normally would not have taken. I really hope that attending this camp will help me gain a deeper understand of the vast world of physics and its various concepts.

I would like to thank Mr. Davis for being such an amazing mentor and giving me invaluable advice; without his support, none of this would have been possible! I would also like to thank Mr. Yim for providing me with an unparalleled environment to pursue my interest in math. To my wonderful parents, thank you so much for believing in me; you've been with me every step of the way. I am honored to be a part of the team and look forward to meeting my fellow teammates. I hope we all become great friends!