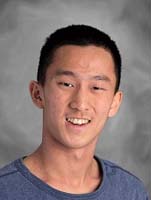 I am now a junior at Thomas Jefferson High School for Science and Technology in Alexandria, Virginia. However, I still owe my interest in physics to my sixth grade science teacher, who noticed that I regularly finished the assigned science work early and gave me a copy of Stephen Hawking’s A Brief History of Time to read. Although I had previously found science little more than a chore to be memorized in school, my teacher opened my eyes to the incredible mystique of physics, expressed by one of the most famous modern popularizers of science. As trivial as it sounds now, I realized that I could learn science outside of school and found motivation to do so because Hawking seemed to throw out a challenge. With his description of puzzles still inherent in modern physics, I realized that there were still problems in the world that needed solving, a powerful reason to study physics. Besides for this, Hawking instilled in me an awe for physics; something about the otherworldliness of the undetectably small and the unimaginably large and the way physics sought to piece it all together.

Since this initial interest, I have continued to pursue physics despite challenges from the class structure of my school system. In middle school, for example, science courses present a rudimentary survey; however, physics was almost untouched compared to the more dominant disciplines of chemistry and biology. Although high school course structure took the same course, with physics locked until junior year, I took a different path and arranged to take AP Physics as a sophomore, a decision that I now see as one of the best of my life. With relatively abundant time to thoroughly study physics, I finally moved beyond the vague enchantments of Hawking and similar writers to study the grit of physics itself. Though at times I grew frustrated by the apparent ugliness of certain problems, particularly those associated with olympiads, I have found in the overall structure of physics a two-sided beauty. Not only are the laws of physics themselves beautiful, featuring impressive symmetries such as those in Maxwell’s equations, such elegance exceeds its mathematical origins because it describes the universe. Studying physics has shown me a deeper beauty to the world because now, instead of just seeing the crash of a wave or the austerity of a wave, I appreciate the millions of forces or the oscillating fields that come together just right to produce an immensely complicated product.

By participating in physics olympiads and this summer program, I hope to better understand the world that I live in. Beyond better appreciating the world is a beautiful place, physics has shown me not only that the world obeys elegant principles but also that I can describe it using those same concepts. Simultaneously, this program brings me another step closer to the “real” physics world Hawking gave me a glimpse of in the first place, where classroom concepts can have real impacts as varied as cutting fuel emissions and helping make the next big discovery in modern particle physics.