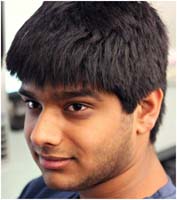 My earliest childhood memories are of cozy evenings spent curled up in the family room learning math and science from my Dad, an applied mathematician. I so wanted to be like him and when I was six, I thought I had made my first great "original discovery" when I "proved" that except for the first three integers, no two consecutive numbers except 2 and 3 can be prime. My proud but very amused Dad gently told me that this was a well-known fact, and I was so disappointed. But my love of math has stayed with me.

As a child, I was fascinated with trains. I spent hours with the giant Baldwin engine at the Franklin Institute in Philadelphia. The Franklin Institute also introduced me to the world of Ben Franklin and his inventions and instilled a love of science. I love to read, pretty much any non-fiction appeals to me but I especially enjoy reading about mythology, history and geography.

The summer before high school, I saw a calculus book at home and I started to read it. Unlike algebra and trigonometry that I had learnt at school, calculus spoke about the motion of objects. I was surprised by the fact that most of calculus was initially developed by physicists. I thought that it might be a good idea to learn some physics. Knowing a little calculus helped me understand mechanics but I had a harder time with electromagnetics since I did not know any vector calculus. Then, I found "Grad, Div, Curl and All That" in the library and found that electromagnetics was fun. I decided to take the AP Physics C tests at the end of my sophomore year. Since I had already prepared for the Aps, I decided to try out for the Physics Olympiad. I was inspired and helped by Kevin Zhou, a senior in my school who was in the Physics Olympiad team and loved to teach physics to anyone willing to learn. I learned a lot from him. I got a bronze medal in the semifinals. In my junior year however I was finally able to make the 2014 US Physics Team camp.

I am delighted and honored to be part of the team this year. I am really excited to meet other high school kids who love physics and I am looking forward to another great experience at the camp.