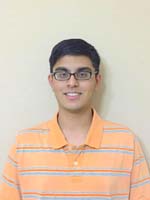 Initially, I never was solely interested in physics, but in science in general as the captain of my school’s middle school Science Bowl team. I studied almost every science I could at that time for Science Bowl competitions, from earth science to biology to physics, of course. Since the actual Science Bowl competition has always been focused on knowing interesting facts about certain scientific concepts, I enjoyed all of these sciences because they all taught me something new and interesting. I had this mindset until close to the end of 8th grade, as I spent much of my time reading random textbooks so I could do well in Science Bowl.

In 8th grade, I was offered the opportunity to take a life-changing course. My school called it LEAP Physics, essentially the first half of the now-defunct AP Physics B course. Initially, I took it as just another science class, not considering the elegance of my solutions to problems as much as the content I was learning. However, my perception of physics changed when I took a test that had, a “bear” of a thermodynamics problem, as my physics teacher called it, a problem that to this day he claims to be the hardest problem he has ever given us. Somehow, I was able to solve it completely with the little information given in the problem, and that day marked when I saw more to physics than just the trivia I was originally drawn to. I witnessed the elegance in solving physics problems, and I gained confidence, confidence that would allow me to trust my intuition when solving more physics problems. From then, I saw my potential to do actual work in physics.

My newfound intuition drove me to search for more physics problems, and when I came across the USA Physics Olympiad at the end of 9th grade, I just had to start a club for this at school. And ever since 10th grade started, I immersed myself in as many physics problems I could possibly find. I often would show my physics teacher Mr. McClernon a physics problem I had been working on, and I’d leave it on his whiteboard on the side for him to look at throughout the day. Every one of these problems made me love that intuition I had developed even more. I recall one problem from a textbook about unraveling a string that is in a heap. The textbook’s solution used a complex set of differential equations, but I came up with a solution that required no calculus at all. Problems like this one showed me how powerful physics can really be, when I used that same intuition that I developed in 8th grade.

I would like to thank my family for supporting me both with my parents’ unconditional assistance and with the joy I get from my sister every day. I would also like to thank Mr. McClernon, my physics teacher ever since 8th grade, for showing me the elegance and beauty of physics and showcasing his impressive ability to draw electromagnetic waves in all three dimensions on a mere classroom whiteboard with ease.