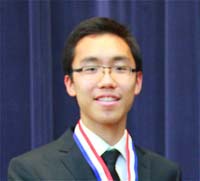 When high school students are asked to rank their least favorite subjects, math and physics often rank among the top of the list. Contrary to all that stuff up there, math and physics are my least favorite classes - that is, when they consist of repeated problems about “selling gadgets in a factory,” “Bob the major league baseball pitcher,” or “stretching and rotating a loop of wire.” The problem with them is just - they’re boring. They need more sparkle. There should be more laughter in a math class than from an awkward typo or a shoddy diagram produced from Windows Paint.

Don’t get me wrong - it is true that hard study builds knowledge and practice hones skills, but true intellectual curiosity is required to innovate and excel. Noticing patterns in the multiplication table at a young age piqued my interest in properties of numbers, which later drove me into solving mathematical problems. My love for decoding puzzles and reading detective novels got me into bigger mysteries in cryptography, computer security, and various sciences. My belief in passion and enjoyment as necessary learning conditions have helped me even decide my future career directions - as I developed a growing interest in solving real world problems, I easily applied the same thinking skills in fields like physics and computer science.

The line between academics as an obligation and an enjoyable hobby blurred as I broadened my definition of learning. Last summer, I hosted a math tournament at our own high school to young learners from 8th grade and below. Despite the successful tournament, reviews from children indicated that they learned more in our “mini-events”, or sets of games and fun activities related to mathematics. It struck me that a hands-on learning environment can be less attention-demanding as well as more effective than a traditional classroom. The dryness of math formulas and techniques has been hidden behind the intriguing patterns and strategies behind the games - while fiddling with a Rubik’s cube and numbers on a Sudoku puzzle, a youngster unknowingly learns the fundamentals of group theory and linear algebra. These kind of learning conditions exist in other fields as well. As I explore wild hypothetical concepts like magnetic monopoles on the semifinals exam, I acquire a deeper mastery in physics; as I take a crack at a cryptography or forensics challenge during a CTF competition, I become more familiar with the techniques in computer security. I believe the future of learning lies in such immersive and practical environments like those in Hackathons and CTFs. After all, who said you can’t learn and have fun at the same time?