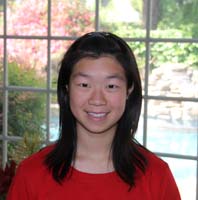 I'm super excited to be back at camp for another year! Last year was such an amazing experience for me, and I can’t wait to dive into another week of fun filled physics.

Lately, I have been in awe of how quickly time has flown by this past year. Junior year passed in a flash, and I am still recovering from its stressful glory, especially my attempts to juggle school, physics, math, and periodic camp reunions with friends from last year’s MOP and physics camp. Like many people who stumble upon physics, I started off as a math person, but attending physics camp last year definitely changed the way I viewed my passions: I realized that I didn’t have to choose a single area and define myself as being solely a math or physics person. As much as I do truly enjoy competition math, learning physics has been a gradual but remarkable process of discovery, and over the past year I have come to see the subject in a whole new light, deeper than the physics usually taught in schools and deeper than anything I could have imagined before attending camp last year.

I've also noticed that the subject has slowly woven itself into my everyday life, or at least that I have begun to notice its presence more and more. It may have been a coincidence that I read Richard Feynman's Surely You're Joking, Mr. Feynman! around the same time as the debut of the movies Interstellar and The Theory of Everything, but I know that I enjoyed all of them tremendously and really hope to encounter more physics-related literature and cinema in the future. Well, maybe The Theory of Everything wasn’t that physics-related. But Interstellar in particular really struck a chord with me once I finished the movie. I remember lying awake at night thinking about the endless possibilities of space-time travel, across the universe and into worlds beyond…

All in all, I'm looking forward to another amazing week and a half of spending time with more brilliant peers and coaches! I would like to thank my physics teacher Mr. Davis for all of the support that he has given me these past few years, always encouraging me to expect more out of myself! I would also like to thank our high school math club’s advisor Mr. Yim for doing such an amazing job with Saratoga Math Club – I've had some pretty spectacular experiences there. Looking back, I'm still shocked at the fact that I’ve been invited to the U.S. Physics Team for two years in a row, but considering the tremendous support that I have received from my teachers, family, and friends, it no longer seems as unbelievable.