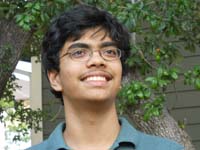 Last week I successfully baked pretzels. I attended the 2013 IMO training camp (for the Indian team). I have experienced the peace of a forest. I also lived 8 years in India. That was fun. Luck honors me frequently.

I am not sure what the deal is with me and physics. It has been a while, and times and I have changed since. The idea behind physics was that as far as anyone I knew knew, physics was hard, and not many people understood it too much, and it looked good. Somebody said read "Resnick and Halliday", so I was provided a copy, and was made to get busy. I am not sure I knew exactly why. Something about my future. I didn’t know Calculus, but neither did anyone else, so I had to deal with it.

And math. I shouldn’t leave out math. When I say physics I mean physics and math.

I figured out Calculus somehow. I only now realize how lucky I am that I considered trying to figure things out a possibility. I worked through the resources I had mindlessly, almost, at first. I was convinced I had to read the book, so I read it, and put my heart into it. It’s best not to second guess yourself. I might have been trying to run away from coming up with some other way of establishing a meaning to myself, justifying myself. Sometimes I think that, but I don’t think it really matters. All that matters is that it helped.

Physics soon became part of who I was. This was scary considering that I didn’t really know if I even liked it or not. I had never actually answered that question. I had asked it plenty of times, but I guess I was afraid of commitment. But I spent a ton of time with it, since it still helped define me and give me meaning and what not, and so the relationship developed its own personality. I didn’t like it for it's applications, or for it's problems - I liked it for itself. My brother says I should go marry it. Reading about ergodicity last night I realized I didn’t need to have any interest in it at all, but I did. I guess it is just a matter of people making the most of what they have.

Something about that worked, I think. Two years ago, I used Lagrange multipliers to boldface an inequality problem (I had no choice) on a math olympiad, and a few months ago I saw it being used to describe statistical distributions in an online lecture series on physics. There is something inherently pleasing about that even though it is just a mathematical trick.

Over time I noticed things. The sway of a conscious sea, the breathtaking taste of water after a couple of hours of soccer, the sunlit transparency of a quiet lake, the soft, lazy pluck of a guitar… they had something to them. The more I learned about physics and how the world worked, the more aware I became of the existence of a reason behind why things worked. Physics taught me to appreciate elegance, I think.

I am glad I get to come here. I have never met other physics enthusiasts before, and I look forward to doing that.

Also, thanks Aai and Baba for everything. And Bo.