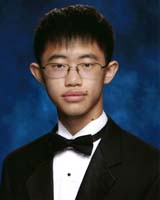 I’ve always been a curious child: learning as much as I could about the nine planets when I was a child (Pluto was still considered a planet back then), and annoying my mom with endless questions about how the washing machine worked, how its motor worked, why electricity made it spin, and what the biggest number was. As a result, no one was surprised when I became fascinated with math, and its world of patterns and numbers.

Throughout middle school, I participated in math team, and through it, many math contests. At first, it was mostly about glory and winning. After I got to know the other math nerds in the area, though, going to competitions became more about making new friends and meeting old ones. My first taste of physics came in 8th grade, when I became the “physics person” on my Science Bowl team through basically random chance. And even though I lost us a big match because I failed to solve a basic kinematics problem in time, I remained interested in physics.

Part of the reason I love physics is that the universe is made of physics, so learning it means I can understand how the world around me works. I distinctly remember reading a Magic School Bus book about electricity, and being confused at the part where they see the inner working of a power plant. How could a spinning magnet possibly make electricity? Nine years and a lesson on Faraday’s law of induction later, I finally understand. I also remember wondering how planes flew when I was five. 13 years and many internet searches later, I still have no idea.

My first real physics class came in 9th grade. I found it fun, but unfortunately too easy. Fortunately, my parents found the F = ma test, and suggested I sign up. My school had no physics team at the time, only a theoretical physics club that was geared towards sharing cool tidbits about the latest discoveries in physics. It was fun, and I joined, but it didn’t run any competitions. To fix this, an older student and I founded the physics team, which would handle the contest side of things. That year, I did surprisingly well on F = ma, and qualified for USAPhO. Even though I didn’t do well, I resolved to do better the next year, although I never imagined I would qualify for the camp. Last year, due to a combination of luck and an introductory quantum and thermodynamics class taught by my amazing physics teacher Mr. Hanson, I qualified for the camp.

This year, after reading Morin’s Introduction to Mechanics and watching Walter Lewin’s lectures, and also reading some of the Feynman lectures, I was invited to physics camp again. I can’t wait to see my friends from last year’s camp, and to meet everyone new! Oh, and also to learn physics. That’s kind of important too.