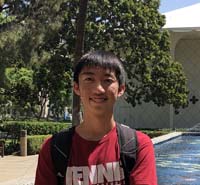 Like many of my peers, I got in to the world of Olympiads through Mathcounts and AMC 8. I, as well as all of my friends, raced forward to become the best mathlete. I actually got pretty good at math, but became disillusioned by the unintuitive nature of certain math concepts. Now, I enjoy math for its beauty and rigor, but at the time, I just crumpled under the pressure.

At the same time, I competed in Science Olympiad. My earliest experiences with actual physics were through the events that Science Olympiad put together, like Simple Machines, Shock Value, and Crave the Wave. I learned about the basics of physics and all the wonderful phenomena that were derived from these basic rules. I truly enjoyed competing in Science Olympiad because the events were focused and exciting. Due to my break-up with math and my experience with Science Olympiad, I shifted my focus from math to physics.

I started learning mechanics in the beginning of ninth grade. Initially, I disliked it, as I didn’t “get” basic concepts like energy or momentum. I was clueless about the simplest equations and concepts in physics. If it weren’t for my parents, who encouraged me to continue studying physics, I probably would have quit and refocused my energy into math. However, as I learned more physics through self-study, I came to tolerate physics, not hating it, but also not appreciating its beauty. My attitude towards physics completely changed in the summer of my freshman year, when I attended a summer Physics C class. My teacher, Mr. Nandan Das, showed me the beauty of physics and the wide variety of situations that can be solved with just a few simple ideas. I was impressed by the elegance of physics equations and the fact that the equations pretty much always worked. I was amazed by the tricks he used to simplify complicated physics problems into thirty second solves. Because of this summer program, my passion for physics was ignited. Through high school, I continued studying physics and enjoyed learning about new concepts and problem solving techniques, making the USAPhO in sophomore year, and eventually making it into Physics Camp as a junior.

Physics Olympiad has given me a direction in high school, and has allowed me to focus my energy into something I enjoy. Without Physics Olympiad, I suspect that I would have had much less motivation to work and study. Of course, without plenty of help from classmates and teachers, I would not have had nearly the amount of success in Physics Olympiad that I currently have. I am especially thankful to my parents for supporting me the whole way in my physics journey. I look forward to returning to Physics Camp!